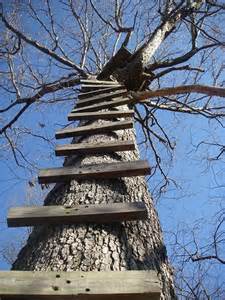 On Friday, I fell from a tree stand.  I would not recommend this…especially to anyone over forty.  This is the third time I have come down a tree stand at a gravitationally accelerated pace…once in my twenties…once in my thirties, and now hopefully the only time in my forties.  If this happens again in my fifties, I am pretty sure that will be the end of me.  This one was, by far, the most painful…I came down face first and then injured my shoulder.  The good news...nothing was broken…aside from my pride…and breaks in my skin. The bad news…everything takes longer to heal, and I like pain less now, than I did in my twenties and thirties.
When I got home, my wife asked me why it is always me that is the one who is falling from the stand and getting injured and not anyone else… “Just lucky I guess.” That, and the fact I like to attack any task that lies before me.  Although, I have to admit…after I smashed my face on the newly cut oak log below…I had no desire to climb back up and begin to put the tree stand up again.  Truth be told…I was afraid to climb up anywhere over 12 inches high.  Thankfully, I didn’t have to…my younger brother (38) who was with me, willingly took the lead and did all of the climbing.
It’s interesting how our life circumstances affect the way we look at things.  The older I get, and the more I fall from trees, the more apprehensive I find myself to be when climbing to any kind of heights.  We could call it “learning” from life lessons…but I think there is more to it than that.  I noticed that I had a strong desire toward “self preservation” after my fall.
I was reminded of David, when he came to the standoff between the Israelites and the Philistines, (1 Samuel 17).  A man named Goliath stood between the ranks and called out to the Israelites…shaming them and shaming their God…Yahweh.  All of Israel was afraid.  Somewhere along the line, they had lost their confidence.  They no longer looked at the Lord their God for their strength, their protection or their confidence.  Rather, they found themselves fearful…and looked only to their “self preservation.”
Then, David came onto the scene…with a peculiar confidence…a peculiar perspective that had been forgotten by the Israelites.  We then saw the Lord, use this young peculiar person, to bring back a peculiar perspective to the entire nation of Israel.
What about us?  Are we more concerned with “self preservation?” or are we willing to become a “peculiar person” with a “peculiar perspective”…that transforms others around us into having a “peculiar confidence” in The Amazing God.
Posted by Pastor Ryan Olson at 1:12 PM No comments: 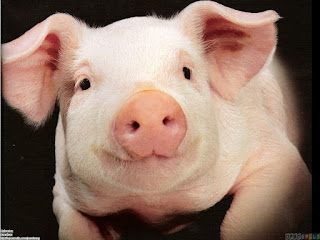 When my oldest daughter, Hannah, was in first grade, her elementary school music class produced the soon to be Broadway hit, It’s a Barnyard Moosical.  With a title like that, you expect nothing short of The Music Man or State Fair caliber production.
Like any great musical, there would be auditions.  In the weeks leading up to the auditions our daughter was beside herself with excitement.  She wanted what any normal aspiring actress would want at age 7…to be a chicken.  Fairies, Princesses…and Fairy Princesses were so “last year”…now only one thing would do…to be the silly, strutting, clucking, giggling…chicken.
Sadly, Murphy’s Law reared his ugly head, and our daughter found herself sick on the day of the auditions and missed the assigning of the parts.  There would be no tryout for her…there would only be resting the role of the chicken stardom, into the hands of destiny.
Later that evening…Hannah was feeling well enough to attend our Wednesday night ministry night (AWANA).  Even as we drove to the church…she couldn’t wait to find her fellow classmates to ask if she was indeed one of the celebrated chickens.
However, it was not to be.  Rather than having all of her first grade dreams come true…she was told that she would not be a chicken…instead, she would be a cow.  There is a slight pause…and Hannah responds, “That’s ok…the cows dance…I like to dance…”
For the rest of the night…Hannah could not stop talking about how excited she was to dance and be a cow.  Even the next morning…she was excited for music class…where she would learn all that the cows would say and do.
After school…she got into the van…and we asked…“So tell us about music…what dance do the cows do?”
Hannah replied…“I’m not a cow…I’m a pig…”
“How do you feel about that?”
“It’s ok…pink is my favorite color.”
What I wouldn’t give to have that kind of perspective when encountering “hardship” after “hardship.”  It’s humbling to recall how a first grader can handle the ups and downs of her complex first grade life...when many times I can’t get outside of myself and gain any true perspective.
In John 11:1-16, Jesus is thrown into the midst of a situation that causes everyone around to him loose perspective.  We would find ourselves in the same boat, I’m sure.  But, Jesus displayed a different perspective.  His good friend Lazarus had died…and where everyone around him saw danger and tragedy…Jesus saw an opportunity for the Glory of God to be revealed.
It makes me wonder, “What am I missing?  What do I need to see…that I am not seeing?  How does my perspective need to change?”
What about you? What do you need to see that perhaps you are not seeing?
Posted by Pastor Ryan Olson at 12:50 PM No comments: 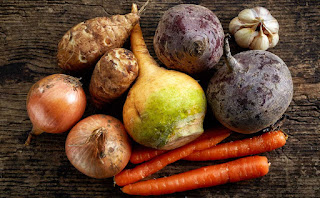 I was asked to coach 5th and 6th grade football for the past two seasons.  Apparently, the only prerequisite to being qualified to coach football at such a grade level, is the fact that you are breathing, have a son who wants to play football and unlike the majority of the other kids’ fathers…you can’t say no…I should have said no.
The extent of my football knowledge is the 1988 Darren Nelson drop, the 1999 Gary Anderson missed field goal, the 2010 Bret Favre interception, and the 2016 Blair Walsh frozen flop.  I really have no business trying to teach anyone how to play football…yet, that is what I agreed to do.  At least they “doubled” my pay this year, compared to last year…yet it is still zero dollars….hmmm?
Football isn’t like baseball (which I would also have no business coaching), when it rains…you still play.  This past Monday, we held our usual scheduled practice…in the rain. By the end of practice, there wasn’t a dry spot on my body…which is remarkable, because I was wearing two raincoats.  Perhaps, I need to invest in either a new raincoat…or at least make myself a suit out of Tyvek house wrap.  Cautiously, I had put my cell phone in my pocket…beneath both raincoats…only to find that somehow water still penetrated through both coats, leaving  my phone sufficiently wet enough to fry it.
That’s a bummer…
Not only do I not get paid for coaching…but apparently I actually have to “pay” for the privilege of coaching screaming, inattentive 5th and 6th graders.
I am humbled to say…that I missed my phone much more than I expected.  I never would have lumped my phone usage in the arena of “needing” a cell phone…I now realize that I was wrong.  As a result of being “cell free,” for just 36 hours, I nearly left our daughter home from school alone, locked the dog up unnecessarily, and missed the pick up my other daughter after Cross Country practice. Do I need a cell phone?...Technically…no…but it kind of feels like I do.  This has caused me to ponder.  What do I need? Do I need a car?...Again, I suppose, technically, no…I would just have to choose not to go to certain places.  Do I need food?...Yes…but not as much as I think I do.  Do I need deodorant?...I say no…Sarah says yes…hmmm…I guess we’ll have to agree to disagree.
Do I need Jesus? Yes…I believe that I need him…whether I realize it or not.  In John 10-31-42, Jesus continues to interact with Jewish leaders and other Israelites.  I find in these verses a picture of two groups of people. One group (Jewish leaders), reject Jesus and see no need for him…the other group (other Israelites), believe that Jesus is who he says he is.  Yet both groups have something in common.  They both desperately need Jesus for their salvation…the difference is…some see it and some do not.
My prayer for you is that you will come to see that we ALL desperately need Jesus…whether we think we do or not.
Posted by Pastor Ryan Olson at 6:30 AM No comments: