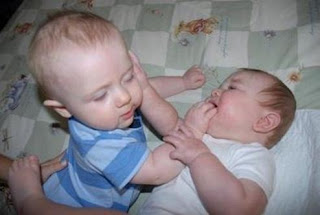 I had my first encounter with cage fighting when I was about a year old.  I stood in the corner of my cage, each hand grasping the top of the adjacent railings to my left and right.  I stared at my opponent and screamed.  He, in the opposite corner stood, with eyes wide open, cowering.  I could smell the fear on his breath…or perhaps it was the smell of Enfamil…hard to tell.  My opponent being 14 months older than myself was still no match for me…I had a diaper and I knew how to use it. My brother and I shared a cage for the first year of my life…then I became the victor…I owned the cage...and had it to myself.

My second encounter with “Ultimate Fighting,” was in college.  I had been approached by a friend, from high school, who had earned himself a black belt in the fine are of Karate…it’s always more fun to pronounce it…car-rot-tay…try it…see what I mean?  He had begun to transition into some jujitsu training and asked for my help.  I assumed that this was because of my athletic prowess…but, after the fact, I think it may have had something to do with the fact that he wanted to punish me for dating his sister.  I do believe that his hope was that, I, as a wrestler, would be able to provide him with a different style of sparring compared to his normal martial arts partners.  We worked out in his basement, in which he had mats laid out from wall to wall.
After a little workout on our feet with takedowns…we took to the mat where we began sparring in efforts to make the other person “submit.”  There are pretty much two ways to get someone to “submit”…or “willingly quit.”  #1. Generate such legal pain that the other person begins whimpering, sniveling, crying for their mother, or they become deathly afraid of breaking a body part.  #2.  Pass out.  We sparred for about an hour and a half each creating submissive situations with the other.  I used my wrestling to create submissive leg locks (illegal in wrestling…but not ultimate fighting).  While he worked chokeholds on me…making me whimper, snivel, cry for my mom and afraid eyes were going to pop through my nose…I know…that’s not realistic…but it sure felt like something was going to pop…so…my ultimate fighting career ended after about an hour and a half of training.
I think submission is interesting.  The Greek word for submit is hupotasso, which is actually two Greek words, upo and tasso.  Upo in the Greek means “to place under,” while tasso means, “to put into order.”  So in the Greek culture the word, hupotasso, would refer to putting yourself under the order of another.  It would often be used in the context of the military, whereas, soldiers would be put, or would place themselves, “under,” the rule of the authority placed in their lives.
Ephesians chapter 5:21-6:4, sets the stage, for some amazing scriptural imagery of submission.  The entire book of Ephesians has been painting this picture of unity that God creates in people who choose to follow him, and how a sign of spiritual maturity is, in fact, unity.  We also see how as we become “mature” followers of Christ, purity should follow, and our lives should begin to look more and more like the character of Jesus.  Now, while understanding this “unity” in the Body of Christ, we see Jesus call his followers to “submit” to one another.  Talk about counter cultural.  While we live in a culture that cries for justice and fairness…we see Jesus call us to submission.  Jesus calls us to say…”I am willing to be second.”  What would our culture, our country, our world look like…in the spirit of submission?

Posted by Pastor Ryan Olson at 5:51 AM