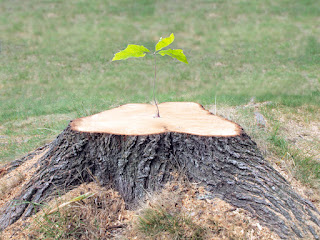 “Ummm…I don’t know Dad…The last time you asked us if we wanted to have some fun, you took us out to cut 3 cords of wood in -30°F temperatures…cut, split, stacked, unloaded, re-stacked…then we went inside for popsicles.”

“No…that’s not right.” My brother replied, “The last time was when he had us help him put the 30ft. antenna pole on top of the 10/12 pitched 2nd story roof, in a wind storm.”

“Oh yeah…that’s right…Sorry Dad…I think we’ll pass on this one.”

“Nope…no passing allowed…grab an ax, a spade and the grub maul…we are going to pull some stumps!”

“A little sweat is good for ya!”

“Oooo, how exciting…maybe afterward we can go inside for some hot cocoa!”

The vast 3 acres of land that surrounded my boyhood home was littered with box elder trees.  These trees were fabulous for recreational climbing as well as escaping the retaliations of younger siblings.  Yet, these trees were notorious for falling limbs…blowing down during thunderstorms and taking all of our summer freedom and childhood dreams of play away as we spent endless hours pulling stumps.

It is possible that the “stump grinder” had not been invented yet.  Though it is more likely that my father was unwilling to rent or hire out the job of grinding the stumps…because it is much cheaper to replace ax handles, bandage up bleeding heads and rebuild manual transmissions.

My dad, two brothers and I picked up the tools and got to work.  We chipped away at the ground around the stump, following the roots out until we could sever them with the ax.  We hacked away at the roots one by one...digging deeper and deeper as we attempted to get under the stump.  We would jab away with an old steel ice chisel until we could get a logging chain wrapped under the belly of the stump.  We would secure the other end of the chain to the Chevy Silvarado…back the truck up right to the edge of the stump…rev the engine…dump the clutch and gun it.  The truck would come to an abrupt bone crushing stop!  We usually remembered to secure our seat belt…after we peeled our teeth off of the steering wheel from the initial attempt.

“Must still be some root holding on…”

This pattern continued until the stump would finally come free.

I recall pulling one stump when I was home from college one summer.  As we were working, my future brother-in-law pulled up into the driveway.  My dad sauntered up to the smitten young man,

“So…I hear that you want to marry my daughter huh?”

“Then secure this logging chain to your truck.”

The only thing better than using a 4x4 to pull stumps…is to use a future son-in-law’s 4x4 to pull stumps.  In times of old it wasn’t uncommon for a young, bespoken, affianced man to pay a dowry for the hand of his soon to be bride…or in some rare cases…the use of your 4x4 to pull a stump…and perhaps the cost of a new bumper…seems a fair price.

If stumps are left in the ground…it is not uncommon to see some life still spring up from the base.  Small young branches may sprout and grow.  However, when the roots are cut…and the stumps removed…that tree is gone for good.

Can you praise God through the pain?  Will you?