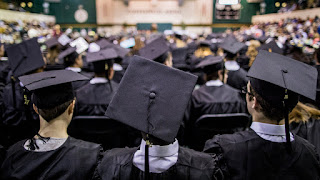 Last weekend I attended my little brother’s graduation ceremony.  He graduated from high school in 1998…I think…and I am pretty sure that he graduated from college in 2002.  I didn’t attend either ceremony…so what am I doing here…attending his graduate school graduation?...I don’t exactly know…but I will tell you this…he owes me.  As I sat in the auditorium, hanging on every word of a soon to be PhD graduate in Bio-science and specializing in something, something, etc., etc, I realized that I hadn’t been surrounded by so many degrees since 2004, when I took a group of high school students to Phoenix, Arizona in mid July.

To occupy my time during the pomp and circumstance, I attempted to order a pizza from my older brother who owns a Pizza Ranch in South Dakota.  He was not in attendance because he “had to work.” I told him, “Well then, get to work and bring me a pizza.”

“I am not going to bring you a pizza! We don’t deliver to auditoriums…especially auditoriums that are 3 hours away!”

“The way things are going here…I think that if you hurry, I’m pretty sure you can have it here before this ceremony is over!”

I didn’t get my pizza.  Thus, I resorted to pass the time by reading the commencement program where each graduate was pictured.  Alongside each image, was a list of the graduate’s accomplishments and where they were going to head off into the wild blue yonder of jobs, families and paychecks.   Each of these graduates was heading off to new horizons and exciting new occupations…except one. There was one graduate who apparently had no idea what she was going to do after graduation…nothing was listed…hey!, maybe she could deliver pizzas! Hey, I could use one right about now!

I reflected on my own college graduation day…seems like just 20 years ago.  I walked up onto the platform…received my degree…went back to my seat and thought…huh…now what?  I had no idea what I was going to do next.  In fact…as soon as I walk out of that auditorium…I was homeless.

This truth seemed to frustrate my dad…which is weird…it’s not like he was homeless…I was.

“Hey Dad, if you are so concerned with me being homeless…how about giving me a couple thousand dollars…that would help for a couple of months!”

I received nothing but a rolling of the eyes and long lecture.

“What are you going to do?”

“What do you mean?” I replied

“We are packing up your car…where are you going to take your stuff?  You have no place to stay.”

“I will figure something out.”

“Hmmm…I don’t know…I think maybe I will head over to my friend Jim’s apartment…he has let me sleep on his couch before…I can probably just stay there.  Look…here he comes now…I can ask him.”

“Hey Jim, can I stay at your apartment tonight?”

“Well…first I have to go pick up the boat that I just bought and then I have to work tonight at 4:00”…I delivered pizzas…and just for the record…I may have considered driving 3 hours to deliver a pizza to my brother…and maybe stayed for a few months.

“Yeah…coolest thing…I bought this boat, but it had no trailer…and then the DNR just gave me this abandoned trailer to haul it…sweet deal huh?”

“How can you afford that?”

“I found $350 in my glove box! I must have forgotten that I had put it in there…and then when I needed it…boom! There it was!  Awesome huh?”

“I fail to see your point on this.”

While my dad and I were continuing our consultation…one of the Crown College administrators walked up to me and asked…”Hey Ryan, do you need a place to stay? I just had a place open up here at the college…I can get you an apartment for about ¼ of what you would find anywhere else.  Craziest thing…I had been booked up for months…but this just opened up.”

“Hey Dad…would you mind helping me unload the car? Looks like I’m staying.”
I have probably frustrated some people by the way I live…perhaps my wife included…but I tend not to ask, because I really don’t think I want to hear the answer.  Yet, is there not a beauty in watching how God has provided and handled so many unknowns along the way.

In the Old Testament Book of Daniel Chapter 9, we find Daniel, anticipating the end of the 70 year exile to Babylon.  There are only a few years left and as he waits, we find him engaging in time with the Lord.  He is reading the Scriptures and he is praying.  Time and time again Daniel has experienced how God has taken care of every little detail in his life.  One key note in this prayer of Daniel…is that Daniel ALWAYS prays prayers that coincide with the will of God.  God has given us promises.  God had given Daniel and the Israelites the promise we find in Jeremiah 29:11…"I know the plans that I have for you…plans for you to prosper and to give you a hope and a future." God is going to restore Israel back to the Promised Land and take them out of exile.

Daniel was able to see clearly how God honored his covenant of love with his people.  Daniel knew that God was going to continue to take care of them.  Even if they, in fact, found themselves homeless…God had more for them that was yet to come.

How do we respond when we don’t know what’s next? Where is the first place we go? It appears for Daniel…that place was the Scriptures and to prayer.

May you find yourself connecting with God in the Scriptures and in prayer…waiting for Him to do all that he said he WILL do…knowing…that He desperately cares and loves you.

Posted by Pastor Ryan Olson at 9:17 AM