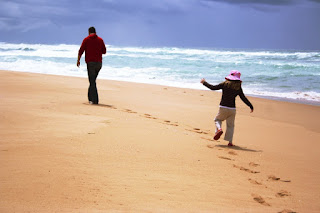 I remember when my dad would go off every fall for the annual deer hunting season. On those Saturday’s, while he was up north sitting in a tree waiting for Bambi to walk by, I would gather up my toy rifle and head outside into the cold morning. I would take my winter parka and turn it inside out to reveal the orange interior, pull an orange hat over my head and climb my favorite tree and wait. It took about 3 minutes and 35 seconds until I was bored…at which time I would go in for hot cocoa. I wanted to do what my dad was doing.

I used to take my “He-Man” action figures…all of which had muscles on their earlobes…and make a “weight bench” for them out of my erector set.  I would take the big, black, thick wheels of the erector set and make it look like these muscle bound plastic men were bench pressing 405lbs.  Why…because I watched my dad lift weights regularly.  I made triceps pulley machines, pull up bars, squat racks and as many other gym paraphernalia that I could conjure up.

When my dad was working on the house, I would take all the scrap boards I could find and cut them up and drive all kinds of nails though them. Why…because I wanted to do what he was doing.
Why did I yell at my siblings for destroying my stuff? Because my dad yelled at me for cutting up and driving nails into all of the lumber that he was using to build the trusses for the house.

I have video of my own son pushing his bubble making lawn mower behind me as I cut the grass on a sunny summer afternoon. Why…because he wanted to do what I did.
When I would sit on the sofa and play my guitar…he would go and grab his own guitar and sit next to me to do what I was doing.

My young son would follow me wherever I would go.  He would follow me through the aisles of the grocery store. One time he followed me into the Napa Auto Parts store and the parts dealer gave him and I, each a free Napa hat.  After that, when I would wear that hat, I would find him heading for his closet to put his own Napa hat on.  Oddly, he seems to now want to avoid following my fashion trends…huh?…what’s wrong with wearing shorts, winter boots and a parka?

During one Sunday morning, he was following me all over the church building.  However, what he didn’t realize is that he had lost sight of me and as he came up and grabbed hold of “my leg”…it wasn’t “my leg.” It was the leg of a handsome, young former student of mine…it is easy to see how he could make that mistake.

We are all following someone.  Who we follow matters.  In Acts 8:26-40, we find Philip.  He is being led away from where he had been in Samaria…to a desert place…for a divine appointment.  Despite the fact that Philip is an early church leader…he is at heart a follower.  He is a follower of Jesus.  He goes and does what Jesus leads him to do.  It is in Philip’s willingness to follow Jesus into this incredible divine appointment that the Gospel goes out to the “ends of the earth.”

Who are you following?