Get to the Table 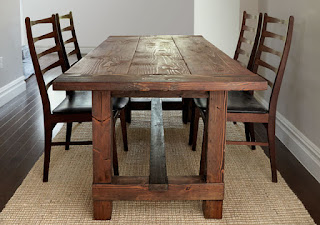 It’s hard being a boy.  Girls think that they have it so rough…but it is boys who really have the greater hurdles to overcome in life.  Girls get to stay inside and play with tea sets and dolls…while boys have to go outside and play Cowboys and Native Americans…when we shoot our cap-guns at each other and say… “Hey I got you…”

Then the wrestling match ensues which relents to fists flying and me grinding my brother’s face into the dirt, until mom calls out, “Boys!...Get to the table…supper is ready!”

When we arrive to the table and sit down…our mother then sends us away to “wash up.”

“Why?” I ask…”I am just going to get ketchup on my face anyway.”

When girls come to the table, they are already washed up and ready to dine.  This just doesn’t seem fair.

When you finally find your place at the table…the girls get served first, which appalls young boys because they know that they are hungrier than girls, (except for the brother who just ate a pound of dirt), because after all…they either just had the tar beaten out of them…or spent all of their energy bloodying their brother’s noses. There is nothing like physical altercation to build an appetite.

“Why does she get the first hot dog? I just spent 48 minutes looking for the baseball that I hit over the barn…Oh look mom…I just found a wood tick!...Cool!”

Here is the thing.  No matter where I had been…or where my brothers had been…or been into…or what my sister had been up to…when it came time to be called to the table…there was a place for us at the table.

There is a time in John chapter 13, where Jesus calls people to the table.  He and his friends are in the upper room and he begins to share the meal in a unique way.  He breaks bread and uses it as a symbol for how he will give his body for them.  He shares a cup of wine in a symbol of how he will shed his blood for the forgiveness of our sins.  Despite my endless list of imperfections and inadequacy…that is a table that I want to be called to. The beauty is…He is calling us to the table.

Perhaps it’s time…to get to the table?

May you find yourself led to RSVP to the invitation…to become a part of the family of God…and get to the Table.