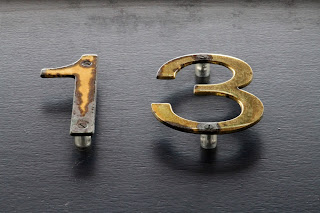 “On your marks,” My dad shouted over the 2 cycle engines whining in front of him.

“Set,” he continued, holding a makeshift flag, a white handkerchief with black permanent marker creating a checkered pattern, sitting on the end of an oak dowel.

I leaned in to the handlebars of my red Honda 50cc dirt bike; the #13 donned the front placard as well as the one to my side behind my left calf.  I didn’t mind the number, in fact I requested it…I didn’t need luck on my side…I was better than my opponent.  He knew it…I knew it…and he was about to taste it.  My right hand revved the throttle ready for the flag to drop.

I dumped the clutch with my left hand and my rear wheel spun violently, digging a hole behind me as my back tire sank nearly to the axle…apparently too much throttle.  My older brother, riding an identical bike, brandished with the #6, eased off his clutch and puttered away.  The race had begun, and I had yet to go anywhere productive. The race was a mere three laps and I was going to be hard pressed to make up the gap that was continuing to expand as I sat there idle.  I eased off the gas…climbed out of my hole…and took off.

The course began with a long straight, followed by a hard left and an easy right as the surface inclined.  At the top of the incline, another left took you back down a steeper slope to a hairpin curve to lead you right back up.  Once on top, the home stretch was a short straight that led to the sharpest left of the course and back into lap number two.

Not every 7 year old is blessed with the coolest dad in the world, who not only buys dirt bikes for his sons, but also has the foresight to create a race track in the back yard using an ancient disk and a drag pulled by an old Alice Chalmers B.

I had run this track hundreds of times.  I knew it well.  I also knew that despite the lead, I would pass my older brother, and pass him I did.  Just as I was finishing lap number two I was right on his rear wheel.  I slid wide to the right as we approached the sharp left hand turn into the long straight.  I cut hard and gunned the throttle, and shot past him to the inside like a stone from my slingshot.  I was immediately filled with a genuine aura of satisfaction that filled my gullet and tingled the hairs on the back of my neck.  One lap to go and I was creating a dominant lead.  I went up the first incline and was on my way back down when I looked over my shoulder to see where my loser of an older brother was. “Eeek,” I thought…he was closer than I had expected.  I looked a second time just as I was hitting the bottom of the hill.  However, as I looked back, my front tire slammed into a rut and I flipped the bike rear over front.  The bike was ok…I broke its fall.

My older brother slowed down as he approached the bottom of the hill so as not to run me over.  Was he being nice…or was he gloating? Then he puttered away back up the hill.  Gloating…definitely gloating.  I hopped back on #13, kicked the starter, nailed the throttle and took off, throwing dirt, mud, and sod behind me.  I could still win! I could still win!

I never let off of the throttle! I was gaining on him fast! I was going to do it! And then…I didn’t.  He crossed the finish line about 6 feet before I did.

“Well, I guess you shouldn’t look back huh Ryan!” my dad laughed.

I gritted my teeth…and cried…“So much for the coolest dad in the world,” I thought.

It is so hard to go through life and keep your focus.  The simple distractions that we face daily are innumerable. We face mountains of tasks, deadlines, family responsibilities, parenting, spousing the list is endless.  Life is hard enough as it is…but then you add in the daunting challenges of sin.  The Bible is clear in its teaching about sin.  Paul writes in Romans 3, that there is NO ONE righteous. Jesus challenges men in John 8, to be free to “cast the first stone,” if you happen to be without sin…there is no one left to cast a stone.  We all sin.  We all have sin in our lives, and we all sin more than we think we do.

But what is our role? What do we do?  If he does the work of changing our hearts…what is my responsibility? It is to repent.

We need to repent and get our eyes back on Jesus.

This is a message for all human kind.  The Sermon on the Mount…is a call to repentance.  May we repent and get our eyes back on Jesus.