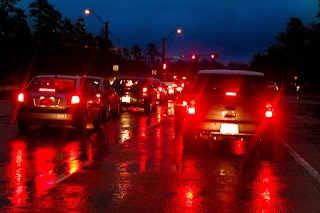 Recently, I was visiting with some friends.  We were reminiscing about the state of the world before cell phones.  I know that this is hard for people, namely my children, to comprehend, but there once was an entire world that existed and functioned before the invention of the cell phone.  One notable difference between the prehistoric world of non-cellular technology and today is the regular implementation of…a map.

When Sarah and I were in our early dating years, I began making trips across the Midwest from central Minnesota to the Detroit Michigan area (her home town).  This trip wouldn’t be so bad if it were not for the incredibly large lake that lies between these two lands…namely, Lake Michigan.  The fact that this lake is there forces would be travelers to navigate through the pernicious city of Chicago, (or the Upper Peninsula, but that is even farther).

The first time I drove the perilous paths of the city of Chicago, I tuned into local traffic reports, while trying to read any one of the half dozen maps scattered across my lap and the front seat.  It is incredibly challenging to read a map, eat a Big Mac, avoid collisions on all four sides…AND count out .40 cents for what felt like unending toll booths along the way.

The city of Chicago uses names rather than numbers for their highways system, which made the local traffic reports confusing and of absolutely NO value. “The Dan Ryan is at a total stand still, while the Kennedy is struggling to clear a 12 car pileup.  The Eisenhower is under construction, so the Jane Adams is about your only way out of the city…but I wouldn’t get your hopes up about leaving the city any time soon.  Whatever you do stay off of the Tri-State!”

I didn’t know where any of those roads were or where they were going…but considering that I was at a complete standstill on I294…I assumed that I was on one of them.

One time, before the inundation of the cell phone and its GPS capabilities, I found myself without a map and needing to head into downtown Minneapolis. The good news however, was that I had a friend who was also heading into the city and he said that we, (my wife and I), could “follow” him.  What he did not say however, was that in this process of “following” he was going to do all that he could do to “lose” me.

Just as he pulled his Ford Taurus away from the curb and I my Chevy Lumina, he gunned the throttle and took off screaming down the country back road like Ricky Rudd.  I did my best to keep up with him, but being a compulsively cheep person, I struggled to push forcefully enough on the accelerator for fear of consuming too much fuel.

At each stop, acceleration and turn, he continued to put distance between our two cars.  When we hit the interstate he was weaving in and out of traffic and I was white knuckling the steering wheel, with beads of sweat running into my eyes.  The stresses of the driving and the wasting of fuel were getting to me.

I barely caught sight of him as he took the downtown Minneapolis exit.  By this time, it was getting dark so I kept my eyes glued to his red taillights.  I knew that if I lost him now, I was hopeless.  I didn’t know the Twin Cities at all and if I got lost, I would be lost indeed.  I did not know the way.  I NEEDED to keep up with him! I gunned the accelerator, did some weaving of my own, even going so far as to cut off some other “city” drivers.  They seem to have experienced this before, as they all seem to share the same knowledge of hand gestures that were mutually shared with me.  I HAD to keep up! I needed to keep in step!  I watched him enter the parking ramp…on two wheels. I followed suit…barely avoiding a collision with a yellow concrete post.  I had done it…I made it into the city…I made it into the parking garage.  I parked the car and asked Sarah pry my hands off the steering wheel and massage my forearms just so I could open my car door.

“Were you trying to lose me?” I asked my friend.

I have since learned to traverse many areas of the country, including Chicago and the Twin Cities…but I still don’t like them.  Yet, in that one night, I am reminded of my desperate need of direction.  In our days of cell phones, GPS and even maps…we rarely have a need to “follow” any longer.  In fact, as people we have become incredibly independent.  We don’t need anyone or anything…except maybe our cell phones.

Paul reveals a different picture in Galatians 5:13-26.  Here, we find a battle that rages on within every believer in Jesus.  That battle is between the Spirit and the Flesh.  The Flesh wants to produce fleshly fruit and the Spirit wants to produce Spirit fruit.  Our job…is found in vs. 16…to “walk in step with the Spirit.”

May you grow in your walk with the Spirit…that He may produce in you ALL of the good fruit of the Spirit.