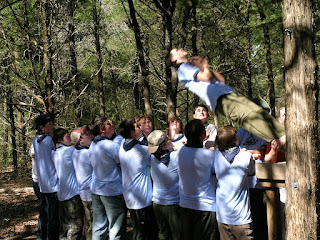 I climbed the 5 wooden steps, each tread crafted by an inverted split log, leaving the flat face as a sturdy surface to ascend to the platform deck.  Upon reaching the platform, I made my way to the edge and looked down the nearly 36 inches below, where 12 of my college classmates stood waiting…each one wearing a sinister grin.

“Now Ryan, it’s your turn, Ha ha. You need to turn around with your feet on the edge of the platform and fall backwards.  We will catch you.  You need to trust us. This is a trust exercise and it is important that we all trust one another…so anytime you are ready…go ahead…anytime now…”

My eyebrows scrunched and concern covered my face as I reflected on some of the events of the past few weeks. I saw Sally below me and remembered what I had just said to her last Sunday after the Vikings had destroyed her beloved Packers, “Wow! You must be ashamed of being from Wisconsin!  Ha ha, the only good thing coming out of Wisconsin is I-94! Bwaaa ha ha.” I am certain that I saw her yellow eyes suddenly flash red as vengeful thoughts filled her mind.

I wonder if George knew that I was the one who had taken his towel and clothes from the shower room yesterday morning.  His menacing smirk told me that he did.

My roommate, Paulie, also stood below looking up at me with his blonde curly haired mullet atop of a scornful face that could melt candle wax. “Yikes!” I thought, “He knows that I ate the rest of his Oreos.”

“Now Ryan, there is no need for you to not trust us…just fall back and we will catch you!”

Certainly, my college professor, Mr. Watzizname, had no idea of my long laundry list of sins.

I swallowed hard and threw myself back believing that today was as good of a day as any to die.

I didn’t die.  My classmates did catch me…and then…it seemed…decided to drop me the remaining 12 inches to the hard dirt floor.

“There, you see Ryan, you can trust us.” My professor encouraged.

“I’m next!” Cried Jimmy. Although no one heard him.

The next thing we knew is that Jimmy, all 300 lbs of him, was flying through the air, heading quickly to the ground with arms flung to his sides like an eagle. My fellow students did what any sane person would do when seeing a giant mass plummeting towards the earth. They moved out of its path.  I on the other hand was unable to move as I still stood in the middle of the pack from my own “Trust Fall.”  I am sorry to say that I was unable to catch Jimmy…I was however…able to break Jimmy’s fall.  He bounced off of me and back onto his feet and exclaimed, “Wow! That was cool! Who’s next?” while I remained still, lying in the dirt, ribs aching, and not breathing.

I have come to find that trust is one of the most difficult things to do.  If William Tell’s son had not been forced to stand tethered to the pole with an apple on his head…would he have stayed there while his father released the arrow?  I highly doubt it!

Yet, despite the incredibly long list of untrustworthy things in this world, I believe that I have found something that is rock solid.  In fact, the Lord reveals this very truth in Malachi 2:17-3:12.  Here we find the most solid and trustworthy truth.  God NEVER changes.  He can always be trusted.  He has never lied. He has never broken a promise. He has always done what he says that he will do…AND he says that we can trust him.  He invites us to trust him and to put our faith in him.

I believe Him, and I am learning to put my trust in Him.  Will you?