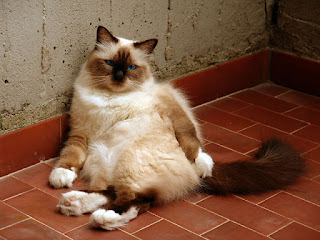 Several years ago I wanted to illustrate the difference between death and life, to a group of middle school students.  I borrowed the skull of a cat from a friend of mine, who works as a cat incinerator…(a sub-chapter of Bob Barkers efforts to help control the pet population).  I’m JOKING!!! …He’s a High School Biology Teacher.  However, in order to accurately demonstrate the contrast, I also needed a “live” cat.  So, I asked a mother of one of the attending middle school students.  She graciously agreed to bring in…Skeletor…a black and white, male, long haired, beastly king of fat cats.
The crowded room of high strung and chattering middle school students, immediately set Skeletor on edge…all the girls swarmed the poor cat, like flies on a week old bratwurst…or wait…maybe that’s not a bratwurst…and the boys were throwing wads of play-dough at each other…and the girls…and the cat.  It is no surprise that at this moment, Skeletor wants out!.

He imbeds his claws into his owner’s cradling arms and frees himself from her grasp…then bolts under a table.  The girls chase after the frightened feline…reaching five simultaneous sets of tender hands at the angry cat…pulling him out by his feet, ears, skin and whatever else they can get their hands on…screaming with excited glee at each and every moment.  Holding the cat firm…one of the girls gently pets Skeletor, trying to calm him, while the fat cat extricates a low…meow? roar? growl?...hmmm…guttural sound emitting from the very depths of the demon that exists within most…maybe all?…cats.

All the while, I am attempting to gain the rooms attention to emphasize what God spoke through the prophet Ezekiel…where the dead dry bones of the deceased nation of Israel…will rise up and become alive again.  When suddenly…Skeletor breaks free…bolts to the window…and jumps onto the mini blinds…and SHREDS them!…Skeletors owner peels the cat off of the blinds…while his claws pull the blinds down with him.  The trauma, continues as Skeletor then proceeds to urinate all over his owner’s shirt…pants…shoes… and floor.  She takes the cat…throws him outside…where he will not be seen for two days…he will then be found dead within a week…It’s not all my fault…just somewhat my fault.

It seemed like a good idea at the time.

I don’t think any of the students grasped the point of my illustration, though I think they will long remember the saga and tragic death of Skeletor.  Especially considering, we did what He-Man was never able to accomplish…defeat Skeletor.  Yet, even as I recall the story…I can’t help but see the contrast of life and death.  Skeletor…though un-cooperative…was very much alive…scared stiff…but alive…until he was scared to death.  That’s kind of the point though isn’t it?  Naturally our lives go from life…to…death.  But, Jesus takes our death…and makes it life.  We are born into sin.  The Bible says, we are “dead in our sins.” Yet, Jesus doesn’t let us stay there…he offers us life…he forgives us from our sins…from our death…and offers us a life…that is a true life…a real life…an eternal life.

Just as God made the dead nation of Israel come alive again, Jesus offers life to us.  Jesus can take the death of our sins…and make in us a life.  When everything else in this world is dying…Jesus is still bringing life.  Ephesians 2:1-10 makes this incredibly clear.  Jesus makes us alive by freeing us from the “dead” weight of our sins.