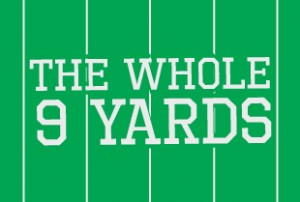 Mae West is quoted as saying, “If a little is great, and a lot is better, then way too much is just about right!” However, I would have to argue…after attempting to put 17 gallons of gasoline in the 16 gallon tank of my truck…that more is not always better.
When it comes to eating , there are some things that I can have more than enough of, before ever taking the first bite…olives… sauerkraut…liver… cows’ tongue…(I have pledged to never eat anything that can taste me back).  Yet, there are some things that I can’t ever seem to quite get enough of…ice cream…potato chips…pie…coffee.
My dad tells a story of when he was a boy. He was visiting his sister and brother-in-law. During the visit, his brother-in-law asked him, “Would you like a piece of pumpkin pie?”
“Do pigs wallow in the mud?!...Yes!”
His brother-in-law cut a generous slice from the freshly baked pie and asked my dad the question, “Do you want the big piece or the little piece?”
“The big one!”
His brother-in-law proceeded to lift the “big piece” onto my dad’s plate leaving only one, lonely piece of pie.  Half a Cool Whip container later my dad finished his big piece of the pie only to be offered by his brother-in-law, “Want another piece?”
“Sure!”
With nothing remaining but an empty Cool Whip container and a crumby pie tin, my dad encountered a pumpkin pie to its “full extent.”
In John chapter 13:1-20, Jesus does something amazing.  It says here in this passage that he now demonstrates the “full extent” of his love.  After saying this, Jesus then proceeds to get down and wash the feet of his disciples.  Jesus has loved people, especially his disciples, all along, during his time with them.  Yet, we find his love takes a huge step forward, and now he demonstrates his love in the fullest possible way!  Jesus empties himself…humbly gives himself up for them…he takes the role of a servant as a precursor of how he will empty himself on the cross and serve them by taking all of their sin upon himself.
That is love…to the full extent! It’s crazy! It’s incredible! It’s complete.
In this case, “A little is great, a lot is better, way too much is the full extent!”
Posted by Pastor Ryan Olson at 6:48 PM