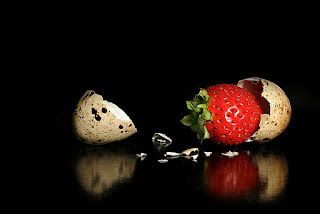 Life is full of unexpected events…like coming home to find a little doggie loggie, waiting for you at the top of the stairs.  You find the unexpected at school, when your 4th grader brings her lunch box home…”Oh wow! You remembered to bring your lunch box home! How nice! Good job!...Ummm…Where are your shoes?”
The unexpected finds you when the teenager, driving in the lane next to you, decides to change lanes… without signaling…while texting something very important to the passenger sitting next to him.
You don’t expect to wake up to your children yelling, “The oven is on fire!” on your 16th wedding anniversary. You don’t expect to have a Razor Scooter left behind your truck tire, nor do you expect to find someone else’s mail in your mail box.
The other day, I was battling through a runny nose and repetitive sneezing.  I enjoy sneezing.  It feels good.  It’s cathartic. Despite sensing the sneeze coming, I was still a bit surprised, as an unexpected glob of mucus and spit, shot out of my mouth and onto the floor of the public establishment, where I stood.  What do you do with that!?...Walk away and pretend nothing happened.
I should have seen that coming…
But I didn’t.
In fact, so many of our unexpected events have subtle pieces of evidence as they approach.  Most of the state of Minnesota was expecting a Super Bowl birth by the Vikings last week.  Boy were we surprised when the Vikings were throttled by the Philadelphia Eagles, 38-7.  Let’s be honest, we should have seen that coming.  This has happened 6 times in my lifetime.  The evidence is there…it has happened before…it will happen again…we should expect it!
Sometimes we say to “Expect the unexpected”…but doesn’t that then make it expected?
In John 12:12-36, we find a huge crowd of people who share the incredible expectation of the arrival of the Messiah…the person who is going to, finally, free them from their oppressors (The Romans) and re-establish the “golden age” of Israel…like what was experienced during the reign of King David.
Yet, they are shocked, when they find out that their expectations will not be met.  In fact, not only will Jesus not take their earthly throne…he won’t even fight.  Instead, He will die.  Jesus, then, calls them to serve Him in the same way that He served them….to die to what they want…to give it up…because there is something bigger…something better coming.
My expectations are often way off base…much like the expectations of the Israelites.  Yet, often, through my unmet expectations, I find that, perhaps, Jesus is doing something much deeper and greater.
One thing we CAN expect.  Jesus gives life…perhaps not how we expected…but He does give life…an abundant and eternal life.
Posted by Pastor Ryan Olson at 1:34 PM