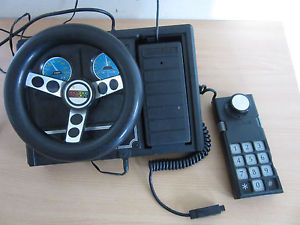 In the late 80’s and early 90’s it was customary to enter into the realm of advanced technology while pursuing your driver’s license.
In the summer before our sophomore year in high school, my classmates and I stepped into the hot non-air conditioned confines of our public high school building and underwent hours of drivers training classes.  These interesting classes of stop signs and passing lanes, helped us refresh our sleep deprived, overworked, I just weeded 3 acres of potatoes, selves.  Attendance was required…open eyes were not.
The classroom was only a part of the educational requirements.  There was also the Simulator.  Advances in modern technology had developed a large, semi-tractor trailer filled with steering wheel consoles and a large retractable screen secured to the front.  Each student would enter the trailer (also no air conditioning), sit at a console, and pretend to drive a car that was projected onto the screen in front of the entire class. Everyone drove the same car…at the same time…it mattered not which direction you turned your steering wheel…the car magically followed the road laid out in front of us.  For dramatic effect, the instructor would occasionally flip the reel to reel projector off as a ball rolled into the street, followed by a young boy chasing said ball and yell… “You killed him!...You are going to prison for the rest of your lives!”
The experience was much like playing Turbo on the Atari…without the dying children and prison…or like sitting in one of those grocery store carts with the attached car.  You turn the wheel, yet, you really have no control over where the cart is going…nor what is being put into the cart. You desperately want to steer away from the broccoli and back over to the cookies, but your mom strapped you into the “car” too tightly and continues to repeat “No” after every request for Little Debbie snacks or Cocoa Puffs.
Once completing the required classroom hours and simulator hours, you sat down to take a written exam.  If you were lucky enough to correctly guess enough answers, they gave you a “permit” to drive.
The day I passed my exam and received my permit, my mother handed me the keys and gave me full access to the car and said, “You drive home.”  After we had traveled nearly one of the thirteen required miles home…she said to me, “You have never really driven a car have you?”
“Nope…but I did have 8 hours in a simulator…does that count?”
“No…no it does not.”
To her credit, she allowed me to finish the drive home and did not allow me to drive again until I had completed the next requirement…actual behind the wheel training.
I remember very distinctly the feeling of suddenly having full “access” to a whole new world of options.  I had just stepped into something that had always been out there...as a promise for the future…but had never yet experienced.
In John 16:23-33, Jesus reveals a truth that throws the disciples into a whole new world of thought.  He tells them, that from the moment of his crucifixion…the disciples will be able to have direct access to the Father, which was unheard of in their culture.  They had always needed a mediator…a priest…someone to go before the Lord for them.  However, when Christ was crucified…the veil in the temple was torn…and suddenly a whole new world was revealed to the disciples…and all who chose to follow Him.
We can have full access…to the Father...because of what Jesus did!  Incredible!