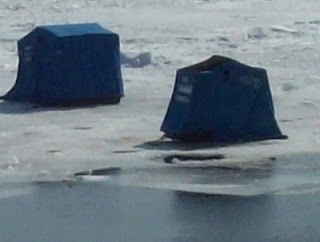 It’s 88 degrees today. That’s pretty hot for mid-September in Minnesota.  Ironically, with the unpredictability of Minnesota weather…ice fishing could open as early as next week.
I like ice fishing.  I do not, however, enjoy the stress of ice fishing on early ice.  I remember friends in high school asking me to go out ice fishing with them in early December.
“Hey Ryan!? You want to head out to Round Lake on Saturday and go ice fishing?”
“Really!? Seems like the ice wouldn’t be thick enough yet.”
“What are you talking about!? There is like two feet of ice already!”
“Hmmm…I find that hard to believe.”
I have developed a formula that measures the thickness of ice on Minnesota lakes. First, you take the ice thickness (i.e. two feet) as told by 16 year old male high school student, who is currently failing math.  Then, divide it by 4 and subtract 3.  Thus, the result of about 3” is the actual ice thickness.
“No thanks…I’m good.”
I realize that most Minnesotans would not hesitate to venture out fishing on 3” of ice.  However, I am not the typical Minnesota ice fisherman.  If I can’t drive on the ice…I usually don’t walk on it.  Thus, when the ice finally hits 18+” I head out onto the lakes…and usually catch nothing…because by the time the ice is that thick, the ice fishing is as slow as my 94 year old grandmother driving her Cadillac Seville in front of the parade of following cars, whose drivers are honking, waving angry fists the air and not throwing candy.
I guess you could say I am kind of the “Doubting Thomas” of Minnesota ice anglers.  I don’t trust the ice…I don’t trust what people say about the ice.  I like to wait until I see a half dozen, full size 4x4 pickups parked on the ice together in a 20 foot radius…then still, drill a series of holes through the ice before I finally journey out.
Yet, as cautious as I am…I find that after I have drilled a few holes…and have found that I have not fallen through the ice…my confidence begins to build.  I remember being out ice fishing with a friend. He was setting us up precariously close to a creek inlet, where you could see the open water.  Closer and closer we walked…until we were what felt to be, about 10 feet from the open water.  The buildup of anxiety was about to send my kidneys blowing out my nose.  After I watched him drill a hole through at least 6 inches of ice…I began to feel a little bit better, but I still wasn’t about to go any closer.
I am reminded of Jesus’ disciple Thomas.  Thomas gets a bad rap for being a “doubter.”  But, he wasn’t the only doubter of the group.  In fact, we see all of these men locked up in a room…afraid...even after the report of Jesus’ resurrection…and at one point, even after they HAD seen him.  They believe…yet…they need to overcome their unbelief.  I think that the time that they spent with Jesus before his crucifixion, was ALL a part of a faith process for each of them.  Their faith grew each time Jesus healed someone…or turned water into wine…or spoke in jaw dropping, authoritative ways.  I believe that their faith grew when Jesus raised Lazarus from the dead, rode into Jerusalem on a donkey, saw the empty tomb, and even saw the risen Christ.  Yet, their faith needed to grow some more.
This gives me hope.  There are times when I feel that the Lord has built a great fire of faith in my heart…and there are times when I feel more doubtful than Thomas. I find myself thankful…that through every answered and unanswered prayer…through the times of confidence and doubt…pain and peace…the Lord is increasing my faith...step by step.  Do you have a greater faith now than you did a year ago? What about ten years ago?  I believe that the Lord wants our faith to grow...and to be influenced by every life experience he walks us through.
Posted by Pastor Ryan Olson at 9:40 AM