The Eyes Have It 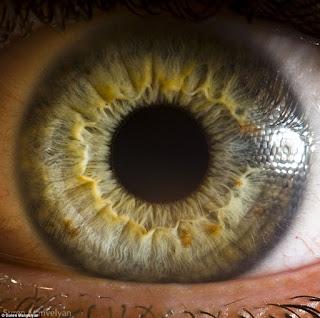 My dad has blue eyes.  My mom has brown eyes. I always thought it would be nice to have blue eyes…or if not blue, then brown would be fine. I remember sitting in 9th grade science class learning about how different genes makes different parts of us different.  For example, one poor sap in our class was blue-yellow color blind.  You wouldn’t think it would be such a big deal, until his girlfriend tells him to sit by him at the “blue table”…only to walk into the dining center to see him sitting at the “yellow table” with a group of girls. It’s over!  I had another colorblind friend who was fired from a strawberry farm…apparently the farmer felt it was important to only pick the red berries.  My friend WAS able to land another job at the same farm…pulling all of the “red” weeds...no problems after that!  Abominable genes!

Genes make us who we are…at least physically.  I recall my three siblings and I standing in the kitchen with my mother.  She had in her hand four straws.  Each one of us took a turn drawing a straw.  The one with the shortest straw had to take out the garbage, and cut the grass, and haul in wood, and take a shower.  I drew the short straw.  The shower was the worst!

I am afraid that this short straw pattern may have carried over into my gene pool as well.  My father has a high forehead with a thick head of hair to cover it up.  My mother has a lower hairline…but her hair has always been naturally thinner.  Guess what I get? High forehead…thin hair…some call it balding…but I call it…abominable genes!

I have flat feet, poor eyesight, back pain, shoulder pain, bad sinuses…when I get a cold I pass out for three days due to lack of oxygen.  Abominable genes!

I have eyes the color of swamp water.  I could stand in my grandmother’s 1950’s era kitchen and have people say, “Wow! Your eyes really make these vomit green cabinets pop!”

I married a good woman.  Without getting too personal, she likes my eyes.  Whenever I walk into a room she says things like, “I’m hungry…do we have any olives, or maybe some avocados?”
Sometimes she will purr like a kitten when she looks into my eyes…she must think that my green eyes make me look somewhat catlike.  I have wondered…that since she likes my eyes so much, if maybe I should “give” them to her…but then I didn’t really “see” the point in that.

Astoundingly, she likes my eyes so much that she will go out and intentionally buy me green shirts because she says it makes my eyes stand out.  Crazy! She actually wants to draw attention to my dead seaweed colored eyes!

In Daniel chapter 1, we encounter four men who are willing to allow themselves to “stand out,” to be noticed, to be put on display…to actually make God shine all the more!  Daniel and his three compatriots have been taken into exile in Babylon.  The enemy’s intent is to completely assimilate them into the Babylonian culture.  Yet, we see the character of Daniel stand out against the Babylonian culture.  It’s like God is putting Daniel on display…to make Himself stand out all the more!

I guess if genes make me the way that I am…I can use myself to put God on display…to somehow use my character to accent Him.

Now, if only I could get my big legs to fit into these Levis! Abominable jeans!