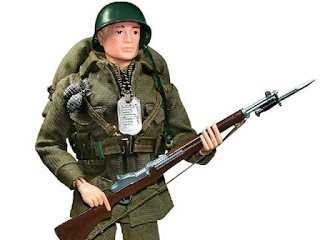 “They have an orange tip on the end of the barrel.”

“It can help him learn how to properly handle firearms”

“Exactly!...now you are getting it…plus…what is the worst that can happen?”

“He could shoot his eye out”

“That rarely happens…plus…that was a Red Rider bb gun.”

“Metal balls…vs. plastic balls…plastic balls bounce off the skin, leaving painful welts, while metal balls can embed into the skin.”

“Do you remember the Nerf gun?”

“That cat could have died!”

“What about the toy bow and arrow”

“Same thing…there is no suction cup to take off of the plastic balls…and it’s not like he can sharpen the end of a plastic ball, and even if he did…it wouldn’t shoot straight.”

“If that arrow had been any closer to her head…”

“I know, I know…Carissa would now have three nostrils…”

“What about the lightsaber?”

Over the years we have had many wonderful toys pass through the confines of our humble home.  Most of these toys were gifts.  Gifts like Nerf guns, bows and arrows, lightsabers, baby dolls, old maid cards, bean bags, and more and more and more.  All of the afore mentioned gifts…and many more unmentioned…have been abused…and in some cases used to cause abuse to other members of the family.

I remember a Godzilla toy I had as a child.  This Godzilla creature had the habit of ripping off my sisters Barbie Doll heads.  Likewise, GI Joe was no innocent bystander…he and his infantry would scale the walls of the Barbie Dream House and attack all occupants…Barbies…Kens….and Skippers.  Nothing was left standing…except a baby sister screaming at GI Joe’s occipital master.  It didn’t really bother me…in fact…secretly; I relished my sister’s pain.

The bottom line is what we find in 1 Corinthians 12:11, the Holy Spirits gives the gifts…as He chooses…when He chooses…for why He chooses.  We are to accept these gifts as gifts of grace…to be used to express God’s grace…and to build up the church.

Posted by Pastor Ryan Olson at 9:28 AM