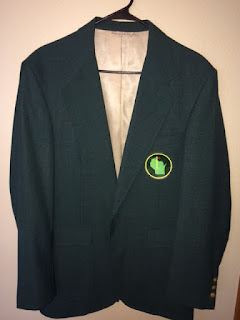 Three of my brothers-in-law and I stepped out of the Ford Freestyle, just as the sun was making its appearance over the distant pines of south, central Wisconsin.  Once a year, the four of us would gather in a central location to battle it out on the fairways.  We play to win.  We play for pride.  We play for a Goodwill green jacket.

We like to arrive early…so early, in fact, that the course has not yet opened and even the squirrels were still snug in their nests.  Why so early?...to avoid the possibility of being seen by onlookers who may ridicule our game or unfashionable clothing.  I stood and waited for my fellow competitors to secure their cleats to their feet.  As I lingered, I couldn’t help but sarcastically mock them at the “imperative” value that these cleats will have on their game.  “Wow! Now you are going to win for sure!  I would hate to have you slip and fall while making that crucial putt! Boy I wish I had cleats…because then maybe I would have a chance to win!”

We walked to the first t-box.  I set my overpriced coffee down on the dew covered grass.  It was a short par 3…only 115 yards or so to the pin.  I pulled out my pitching wedge and teed the ball nice and high to limit my distance.  I can modify my swing to three stages…hard, harder, hardest.  I stepped up to the ball and gave it a nice hard stroke.  The next thing I knew, I was flat on my back looking at the tree tops…while all three of my brothers-in-law were rolling with laughter…I should have worn cleats.

I was so inspired this past week, as I watched Tiger Woods achieve legendary greatness by winning his 5th green jacket…at the antiqued age of 43. I am astounded that he can even walk, let alone play golf.  You would think he would need a walker by this time…perhaps even a wheel chair…or at the very least a cane…although he could probably get by using his putter to keep him upright.  I know how he must feel because as I rolled out of bed this morning to popping knees, twisted neck, and a back that kept me folded in half until 30 minutes after my shower…I realized…I am also 43 years old...in fact, I am a month and a half younger.  Thus…by the definition of the transitive property…I should also be able to win the next Masters tournament…although my odds may increase just a bit if I played golf more than once a year.

During one of our annual tournaments I was leading heading into the last hole.  My brother-in-law was easily within striking distance.  I was on the t-box and all I needed to do was a nice easy swing and keep the ball in the fairway.  So I wondered, “What swing should I use? Hard, harder or hardest?”  I opted for hardest…that should be a nice easy swing to keep it onto the fairway.  I swung the club nice and hard…crushing the ball!...hooking it hard to the left…on a “dogleg right!” Yikes!  There goes the game…the match…the tournament…the green jacket!  Until…my ball hits high and hard on a giant white pine…and kicks hard right…into the middle of the fairway…set up for a lovely look to the green.  My brother-in-law rolled his eyes and said, “What was that!”

There is a story that Jesus shares in the Gospel of Luke.  It is a story about a father who had two sons.  The younger of the two sons, insults his dad by asking for his inheritance early…a request that pretty much says…“Dad, I wish you were dead so I can have my share of your money.”  This disrespectful son then goes off and spends all of his inheritance and finds himself broken and poor. When he comes to his senses and goes back home…his father lavishes love and riches on him once again…while the older brother looks on with disdain.  He says “Dad…I never received a party in my honor…what about me?”  The irony…is that both sons were not in love with their father…they were in love with themselves.  They only saw their father as a means to “get what they wanted.” Both sons were lost…only one comes to realize it…but the other does not.  Have you been lost? Are you lost now? Are you lost but you don’t realize it?  There is direction.

Sometimes we go through life thinking that if I do all of the “right things”…if I live a “clean” life, then God will bless us.  In a case like that…what are we concerned about?...God or ourselves? Do we want God or do we want stuff from God? Do I care about God or do I simply care about keeping my ball on the fairway.

Are you lost? There is direction…it is Jesus.