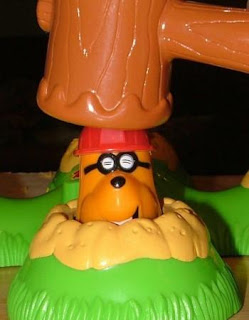 In 1998 I went to Six Flags amusement park in Chicago, Illinois.  I was working at a church in the western suburbs and three of us…all youth ministry workers from the church…decided to go on a “scouting” field trip to Six Flags.  It is only reasonable, that if we were ever going to bring students on an excursion to Six Flags…it was paramount that we know ahead of time; the layout of the park, the best attractions to ride, which are the cleanest restrooms and where the nearest garbage cans can be found in the event of vomiting.  This was strictly a professional and an entirely business minded trip…and I can attest…that very little entertainment occurred on my part.

We explored rides like Batman, The Joker, The Viper, and The Demon…yes…the Demon…three youth pastors stepping into the un-treaded waters of The Demon…and yes…I do see the irony of it all.  Overall, I do not care for roller coasters…in fact, I would describe them as something created by psychotic doctors as a way to induce vomiting…or by deranged psychiatrists to swarm up more business by making the average person’s sanity wane.

I don’t understand these thrill seekers.  If you want to be a thrill seeker…try parenting.  There is nothing quite like trying to get a family of 6 ready for school, after having been up all night with a one month old new born.  This makes roller coasters look like nap-time.

After we had ridden enough spinning rides to make a figure skater sick, I suggested we go look for a place to take it easy and where we could take turns spewing into the fly infested trash receptor.  This brought us near the local “Arcade” area.  There standing before us…was the king of all arcade amusement games…the infamous “Whack-A-Mole.” Upon spotting the mighty ring of Whack-A-Mole games…the oldest and most mature of the three of us stated….”I challenge you both to a game of Whack-A-Mole… Who’s in?”

We entered into the gaming area…each of us selecting one of the “Whack-A-Mole” games that formed a ring around an overly under-enthused high school student worker, standing on a platform in the middle of the circle.

Despite my recently acquired dizzy spell…I was able to accurately take out my sickly aggression on the heads of the little plastic rodents.  One by one, the moles would pop up…and I would whack them back down.  Here a mole…whack!...there a mole…Whack…everywhere a mole whack!.  I don’t think I missed a single mole.

“Congratulations…you win…here is a stuffed Wile E. Coyote that you can carry around the park for the rest of the day, while trying to act masculine…good luck with that…I am outta here,” announced the pimple faced pubescent carnival worker.

As we finished our day at the park, I learned he was right.  There is something that is just not right about buckling in a stuffed cartoon doll in the roller coaster seat next to you…while humming “My Buddy and Me…”

I couldn’t help the humming…it just popped into my head like a bad song that you just can’t forget.
I think it was Rick Warren who referred to life being like a Whack-A-Mole game. Sin rises up…we whack it down.  A problem arises…we whack it down.  In the same capacity, “World leaders are like the moles in a Whack-A-Mole game…they just keep popping up and God just keeps hammering them down.”  That resonates with me, perhaps because of my championship Whack-A-Mole run…or perhaps, because it sure seems to be the way that it is.

In some capacities these world leaders look much the same…power hungry, greedy, ruthless, self-centered…caring only about doing whatever it is that they “want” to do.  Daniel chapter 11 has something to say about that.  We find in this passage, a great amount of detail that expands the visions that Daniel has already had in Chapters 7-9.  In fact the detail is absolutely astounding.  One of the noticeable elements that we find all throughout Daniel is the character of the leaders.  Here in these verses we find the leaders who are all about building themselves up…doing whatever it is that they desire…i.e. Dan. 11:36. We see it in Nebuchadnezzar, Belshazzar, the King of the North and the King of the south.  In fact, we see it in world leaders and rulers in modern history as well…in the likes of Stalin, or Hitler…and perhaps even more recently in some of our current world leaders.