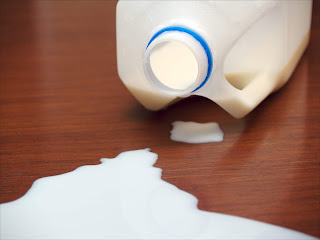 My son loves cereal.  He always has.  He comes by it honestly…because in this capacity, he is just like his mother.  I like cereal fine…however, cereal in my eyes, always seems to lead to messes and spills...I can tolerate messes to a degree…but I do not tolerate spills well, and messy spills are the worst!

When my wife was pregnant with our 4th child, she was appeasing one of her prenatal cravings by making herself some late night oatmeal.  This was a nice change to some of her other cravings, as it was not uncommon that I would find myself making a midnight run to Perkins to pick up some mozzarella sticks and a chocolate shake to satiate her appetite.  On one particularly snowy December night, I drove through town in a blizzard to get her a Subway sandwich…only to find the restaurant had closed due to the inclement weather.

Oatmeal…even late at night…meant that I did not have to slip on my winter boots and head out! As she picked up her hot bowl of oatmeal and began walking into the family room…ready to settle in and enjoy her hot cereal and watch a late night episode of Martha Bakes on PBS…the bowl burned her hand and she threw the bowl onto the floor, splattering the oatmeal everywhere!  I would have preferred to go get some mozzarella sticks in -20° temperatures, yet I bit my tongue.  I have not always been so silent at the moment of the messy messes, but this was one of my better moments.
They say there is no use crying over spilt milk.  Really? I cry over spilt milk all the time…I mean like ALL THE TIME!!!  My poor children are well aware of my aversion to spills and when spills take place I can see their whole bodies tense up… “Oh No!...I spilled!...What is Dad going to say?...he is going to be so mad!”

Sadly…they are correct.  I take no pride as to how I react to spilled milk.  I am sorry family…but I am trying to grow in this way.  My son probably spills more milk than anyone in the house.  It is likely because he is always eating cereal…and is about as reckless as a squirrel on a jet ski and has about as much laser focus as a teenager driving while texting.

I remember on one occasion, as he was pouring a brand new gallon of milk over his cereal, the heavy jug slipped out of his hand landing sideways and began pouring all over the table and the floor.  His shoulders slumped and his chin sagged as he knew that I would not be happy.  But what was worse for me…was watching him…just sit there…watching all of the milk continue to pour out of the jug!

“Pick it up! Pick it up!” I cried.  See…there is a use to crying over spilled milk.

In actuality…what can you do?  You grab a towel and you begin to sop it up.  There is no way to salvage any part of it.  It’s not like dropping an Oreo cookie that you can quickly snatch back up…claiming the 5 second rule and pop it back into your mouth.  Licking the floor looks weird and has been known to be unsanitary.

What can you do?  Nothing.  You can clean it up and move on.  You can continue to live your life…and learn to not get so riled up about spilled milk.

In Daniel 12:5-13 we find God giving Daniel some final words of counsel.  Daniel is late in life and has had visions of a future that has left his armpits sweaty and his heart deeply troubled.  He wants to know some answers to questions like,“When is all this going to happen?”… “Who will this man of lawlessness be?”  God doesn’t necessarily give him the answers that he is looking for.  Rather the answer is more along the lines of…“It is not for you to know.”

So what IS for Daniel to know? Simply put, God tells Daniel to “Go your way.” God calls Daniel to live his life for Him…to continue to serve Him…even if he does not know all of the answers.

Sometimes God calls us to move forward…to follow Him…to trust Him…even without knowing all of the answers. There are some things that we just won’t fully know.  There are some things that we cannot do anything about.  It’s kind of like spilled milk…I can sit and cry over it…or I can understand that it is done and I can move on.  Daniel knew the future…he worried about it…he wanted to understand it…yet, it was not for him to know or do anything about…he needed to move on.

Maybe it’s time for me to stop crying over the spilled milk and just, “Go my way”…perhaps after I have sopped it up…off of the floor with a towel…and tried wringing as much as I can back into the container.