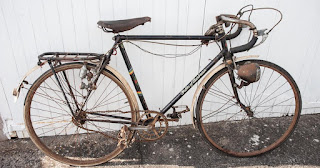 The first Mother’s Day occurred in 1908, founded by Anna Jarvis, who later recanted the holiday because it had become too commercial and lost its focus.  It looks like Hallmark won that battle.  It wasn’t until nearly 60 years later that Lyndon B. Johnson decided to create the official Father’s Day holiday.

Thanks, President Johnson…but honestly…60 years later feels a little like an afterthought.
Let’s be honest…it is.  How many last minute Father’s Day cards or Father’s Day ties does one man really need?

I think that my father has perhaps been the most overlooked man in the history of Father’s Day.  Well, at least by me.  Sorry Dad.  Technology has not helped fathers to receive meaningful gifts on Father’s Day.  Now, dads of all ages can receive a quick text, “Happy Fathers Day…can I borrow the car?” There…check that off the “to do” list.

Perhaps it boils down to a lack of resources.  As a child I didn’t have the resources to either compile or purchase a gift for Dad.  However, now that I am older and have children of my own, I find that I still have neither money, nor resources to express my appreciation to my father…so I text him, “Happy Father’s Day…I don’t have the $50 I owe you.” Maybe I could afford it…but I am afraid that the lessons of frugality that my dad has passed down to me has come back to bite him.

During those early Father’s Days, when I had nothing to offer, I would make him breakfast in bed.  I would toast up some bread and let it cool while I poured cereal and milk into a bowl.  While the milk was soaking into the cereal, I would make him a nice cup of cold instant coffee using regular ground coffee beans.  While the coffee was warming to room temperature, I would attempt to spread hard butter over cold toast.  As a final touch, I would hide the toast under a layer of cinnamon and sugar thick enough to vertically support a homemade Father’s Day card.  It was a breakfast that could take down a rhino.  Oddly, he barely touched his breakfast.

I would then go into our old barn and drag out an old bicycle, covered in pigeon poop.  I would wash it up…add air to the tires…oil the chain…adjust the brakes…and “quickly” present it to dad as a heartfelt Father’s Day gift…before the tires lost air pressure again.

Overall, I had nothing to offer.

But that didn’t…nor has it…changed our relationship.  He is still my loving father and I am still his loving son.  There is a short…but amazing passage of Scripture, found in each of the Synoptic Gospels, (Matthew, Mark & Luke).  Mark 10:13-16, gives us the picture of children coming to Jesus.  As they come, the disciples rebuke them and tell them to go away and leave Jesus alone. We read how Jesus gets upset with his disciples and says the “Kingdom of God is for such as these…let them come.”

I believe that in our efforts to be accepted by Jesus we often default to works…deeds…things that I must do in order for Jesus to like me.  I think we often believe that we somehow have to earn our way into the presence of Jesus.  When we approach him, I think we often try to mentally bring something that we may have to offer.  We perhaps try to bolster some form of our own righteousness to make ourselves feel worthy to be accepted by him.