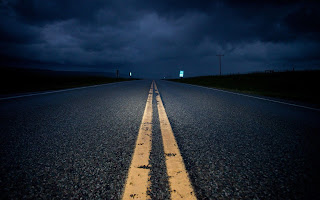 I was driving east on Hwy. 10 in central Minnesota.  It was dark, and I had two of my four children sitting next to me in the front of my small, Ford Ranger pickup.  I brought along the two preschoolers, who were sleeping in their car seats next to me, because my wife was working, and I had this given Friday off. I didn’t have many other options than to bring them along.  I suppose that I could have surrounded the 2 year old Carissa with bottles of milk and given Isaac instructions to not jab or prod her with anything pointy or sharp...nor step on her, wrestle her, or feed her uncut grapes.

“Isaac…now you need to take care of your 2 year old sister…this is your responsibility.  Also, I think that it would be nice if you could mow the lawn…I want it bagged this time…and if you need to use the step ladder to crawl into the trailer…please put it back when you are done!”

“Dad? When you are gone, can I play with your table saw? I want to make something nice for mom.  I am very responsible as I am almost 5 years old.”

…I opted to take the children with me.

I was heading up north to install a countertop that I had made for my parents’ lake cabin.  The job took most of the day, and as I was driving back home, I was tired and so were my children.  I would soon be thankful that both children slept.

As I approached one of the nearing small central Minnesota town, the car in front of me began demonstrating some peculiar behavior.

First, it began to slow way down, I signaled and slid into the open lane to the left. The car in front of me did the same.  This was strange, as there was no reason for that car to get over.  Perhaps he was planning to make a left turn.  I went back to the right…and the car did the same…staying in front of me and continuing to slow down.

I began to think that the driver was perhaps impaired by one or more legal or illegal substances, and I thought it was better to just get clear of the vehicle.  I attempted to go around to the left…and he continued to block my path.  I proceeded to slow down…and then finally, accelerated quickly…passing him to the left.  He turned his bright lights on as he pulled up behind me. He stayed there…continuing to illuminate my vehicle with his bright lights.

I returned to the cruising speed to find that he was staying as close as he could to my back bumper.  Had I not had two of my children with me…I may have made some additional poor choices.  I really did not want to get into it with this guy.

After a series of passing…and being passed, I didn’t know what else to do…I pulled over to the shoulder and stopped…fully expecting him to just continue on and leave us alone.  I really only wanted to get away from the situation. To my astonishment, he pulled over and exited the vehicle and began to approach my truck.  Not wanting him to get close to the truck with my children inside, I too stepped out.

“Stop!...what is it you want? What are you trying to do? I have two young kids in this truck and you are driving like an idiot!” (oops…I used the word idiot…probably not the worst thing I did or thought during this time, but in light of Matthew 5:22…oops).

“Turn your lights off of bright!!!” He commanded.

“Sir…I have not even had my lights on bright!”

“Curse, curse, curse,  I know what bright lights are…you had your lights on bright…turn them off!!!”

“I am sorry…but I have not had my lights on bright!!!”

“Curse, curse, curse…turn your lights off of bright or I am going to k….”

Thankfully, the police officer pulled up.

He came to me first and asked, “What is going on?”

I explained what I had just encountered.  He then went and talked to the other guy.

I couldn’t agree more…except…I really wanted the officer to believe me…to take my side.

He commanded me to go.

How? How can I live in the way that Jesus calls me to live.  Jesus specifically calls us to respond with grace to our enemies…no…more than grace…he calls us to “love” our enemies and pray for those who persecute us…who attack us.

How is that possible?

Who can do that?

Sure Jesus did it…we see that through the Gospels…but me?  I can’t do that.

Jesus has raised the bar to an impossible height! What do I do? Jesus…please help me…to do the impossible.  The words of Paul resonate within me…perhaps the truth that they really are…are finally sinking in!

“I can do all things through Christ…who gives me strength.”

I can love my enemy…only by the strength of Jesus.