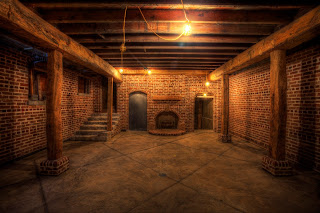 I was in the basement of my childhood home. It was dark…very dark.  I had been sent to the basement to get a Tupperware container full of some of the most delicious Christmas cookies known to mankind.  A cacophony of lady fingers, rosettes, frosted sugar cookies, molasses crinkles and more.  I couldn’t help but salivate as my 7 year old tummy rumbled at the thought of these frozen treasures.

My childhood home was old…perhaps a century or more.  The basement had no windows and the rough cut floor joists were exposed on the ceiling.  I opened the door at the top of the descending stairs and flipped the light switch on.  I could see the glow of the single incandescent bulb as it barely illuminated the creepy space below.  The bulb was a mere 60 watts, which did little more than offer a yellow hue and leave plenty of shadows for the evils of basement creatures to linger in hiding.  I made my way down the creaky staircase.  Solid pine planks spanned across the stringers...many of them cracked along the dried grain.  There was brown paint that lingered on the edge of each tread but had worn away to bare wood where the feet of thousands of journeys had diminished the protective coat. The front edge of the stairs had rounded over from countless shoes and the falling of boys’ shins making tearful impact to the wooden corners.

I finished my descent and set foot on the concrete floor, in the North-East corner.  I walked toward the South-West corner and entered the short narrow hallway where the freezer stood humming.  I pulled the string to a second incandescent bulb that lit up the hallway…doubling the amount of light, giving less space for the evils of darkness to linger.

As I opened the freezer and pulled out the Tupperware of cookies…the 60 watt bulb of the main space went dark.  My heart jumped in my chest…someone had turned off the light switch at the top of the stairs…there was no other switch for that light. “This was going to be a problem,” was all I could think.  Sure I still had the light of the hallway…but that wouldn’t last.  I considered leaving the hallway light on to allow me to see my way back to the staircase in the opposite corner.  But I knew that was not an option.  My father was known to be the “Burning Light Totalitarian.”

“Who left the lights on in the basement?” he would demand. “Do you know how much electricity costs?”

I took this as a rhetorical questions…and so I said nothing…wondering…”How would I know how much electricity costs?”

One night we were all waiting in the car for my dad to drive us to grandma’s house for Christmas Eve.  After what seemed to be 15 minutes and a few honks from my mother…my angry father threw himself into the driver’s seat and proclaimed, “I just turned off 14 lights that were left burning…do you know how much electricity costs?”

“I didn’t know that light bulbs were on fire.” I responded.

That was a mistake. His eyes lit like burning light bulbs and he growled, “Do you want to walk home?”

“We are home.” I blurted.  I couldn’t help it. It just slipped out. Me and my big mouth.  His eyes went from 60 watts to 100 watts like lightning.  My mother’s hand touched his knee.  He calmed down and gritted, “You are lucky it’s Christmas Eve.”

It was shortly after this moment that he sat me down and gave me a lesson as to how many watts a 60 watt bulb draws.  My guess was 60…but somehow I was wrong.  Something about how watts converts to kilowatt hours.  He then began a long monologue on how much we pay per kilowatt hour and how much 14 burning lights cost and that we should turn the lights off.

I listened carefully as I stood with the refrigerator door open the entire time…until he finished because I didn’t want to be rude and interrupt him.  “Can I have some orange juice?” I asked.

I am sure that my father would be pleased to know that I still remember having that conversation…though I still have no idea how to calculate kilowatt hours.

Despite that, I did turn off 13 burning lights in my own home just this morning…I counted them…and told my children what I had just done…and proceeded to ask if they knew how much electricity costs...then…I went and drank some orange juice.

As I remained near paralyzed in the basement, consequently, I concluded that I could not leave the light on and instead I geared up for the journey ahead.  Just before I pulled the string to turn off the light I committed to memory the path that I must take.  I estimated 12 strides…6 slightly to the left to avoid the supporting post in the middle of the room…then 6 steps back to the right to hopefully find the corner and the beginning of the staircase.

I pulled the string…turned off the light…and I ran…through the complete blackness.  As soon as the light went out, I could feel the in-numerable vile creatures dispatch from their shadowy lairs.  The demons, snakes and creatures of death rose up and began chasing me…ready to devour me in the sulfuric darkness.

I sprinted from one end of the basement to the other as fast as I could.  As I reached the stairs, my heart was slamming into my chest and the creatures drew nearer.  I couldn’t catch my breath…not from exhaustion, but rather from the building terror.  I drove my arms as I climbed the creaky staircase and burst forth out of the door leaving the deadly gloom of darkness and the evil that pursued me behind.  I slammed the door shut.  I leaned by back against it and panted…sweaty and shaky.

In the light I had peace.

“What are you doing?” my mother would ask.

“Just conserving electricity” I said…”And running for my life against the powers of darkness of this world.” I thought.

May you find the Light of the World this Christmas.