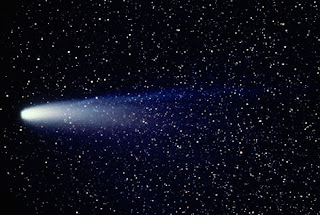 Fourth grade was a major year in my life.  This was the first year that I had a male grade school teacher, the space shuttle challenger exploded, a girl in my class got head lice, oil prices drop below $10 a barrel, (ok…it don’t really remember that one), Bill Elliot sets the stock car speed record at over 200 mph, (that one I do remember), and of course the arrival of Halley’s Comet.  I remember my “male” grade school teacher emphasizing the significance of this event and told us each night to go and look at the comet.  In fact, I recall him stressing the reality that this even would not happen for another 75 years, thus making most of the class 84-85 years old during Halley’s next pass.  I remember sitting there thinking…”huh, 84 years old…I can do that no problem.”  I am not yet half way there, and the way my body feels now?...I’ll never make it.
The irony of it is…I never saw Halley’s Comet back in 1986.  It was there, and all I had to do was look up, but I didn’t.  I missed it.  Now, if I ever want to catch a glimpse of the renowned cosmic wonder…I need to live ‘til I’m 84, and even if I live to be that age, I could very well be legally blind, or have such incontinence issues that I can’t go further than 30 ft. from the little boy’s room.  Although I know many 84 plus year old men you are as young and as spry as an 83 year old man, maybe even some as spry as a 50 year old man.

The point is, I missed it.  For most, Halley’s Comet is a once in a lifetime opportunity, and during my 9 year old ignorance…I missed it.  In the Gospel of John we read how Jesus Christ…the creator of the world...came to the world that He created, and yet, was not recognized.

John 1:10b-12a, “…and though the world was made through him, the world did not recognize him.  He came to that which was his own, but his own did not receive him. Yet to all who did receive him, to those who believed in his name, he gave the right to become children of God—“

Many missed the fact that the creator of the world walked among us.  Not only that, but also, the fact that Jesus…the foretold Messiah, was also missed.  What about today?  Many of us go through this life today and still miss it.  We miss the fact that we have this short window by which to choose to follow Christ.  Rather, we choose not to look…just as I never looked up to see the comet…we choose to avoid contact with the Creator…and Savior…of the world.  Don’t miss it.