A walk in the woods 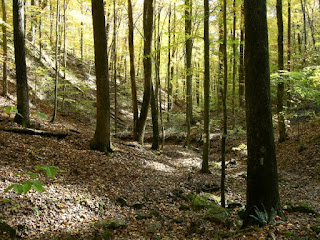 Each fall, for as long as I can remember, my older brother and I would head up to the north woods of Minnesota with our dad to prepare our tree stands for the upcoming season. (Now, it is my younger brother and I, because my older brother doesn’t hunt any longer.  He says, “It’s too cold…and he would rather go ice fishing with his friends, because even though it is cold…it is still nice to just be with people you enjoy hanging out with”…Ouch). It is inevitable, that after so many hours in the woods, there would have to be some incidents…(including last season…see “Tree Stand” post from October 2017).  After years of walking the same forest hills and valleys, I have come to know this area of the forest very well.
This however, was not the case 35 years ago.  I recall following my dad as he worked his way down the trail that would lead to his stand.  To me…the trail seemed non-existent…yet he seemed to know it and go with it like a river flowing through the wilderness.  He would occasionally take a hatchet and freshen a mark on a tree as we went along, my dad in the lead, me second, and my older brother taking up the rear.
As we continued, we would occasionally come upon a stand and my dad would tell us… “That’s your Uncle Arnold’s stand.”…or “This is your cousin John’s stand.”  We would ask, “How much further?”…as if we were riding in a car for a long 20 minute car ride.
He would answer, “It will be a while yet…my stand is about the furthest one into the forest.”
After we had plodded on for what seemed forever…I heard a distant cry of panic from somewhere behind me…“DAD! DAD!”
I turn around…and there is no one standing where my brother was supposed to be standing.
The call continued; “Dad! Dad! Dad!”
My dad called back, “Stay where you are…and keep talking!”
“Dad, Dad, Dad”…(I think he could have said something more interesting…where’s the variety?)
It did not take long for my dad to track down my older brother.  My brother probably got distracted by a squirrel or a mushroom or became enamored with his shoe lace.
My dad then told him…“You did the right thing by stopping…if you had kept moving, you would have gotten lost…from now on…stay closer…keep me in sight…don’t lose sight of me.”
What an incredible picture of following Christ! In John 18, we find…in the midst of the story of Jesus’ arrest and trials…the tale of Peter and his 3 denials of Christ.  If we look at this Gospel account (and include the others), we find that Peter followed Christ at a distance.  I wonder…how would this story of Peter and his temptations ended differently…if he had continued to follow Jesus closely…and not kept his distance.
I have a lot of room to grow in following Christ closely…perhaps you do to? Let us, therefore, spur one another on to come together…and follow Christ.
Posted by Pastor Ryan Olson at 10:53 AM