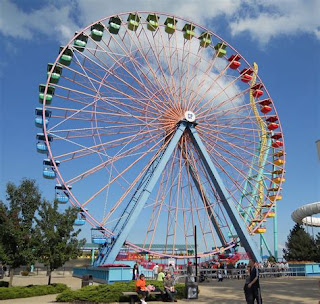 My mother asked me to be a judge for the Wadena County Fair.  In a moment of weakness, I said yes.  Now I will be sending some kids to the Stat Fair…and some home with participation ribbons crying “Not fair!”  The “fair” comes once a year…and apparently in Wadena…it’s next week.
Life is full of “unfair” things.  It is not fair that my dad, who is 21 years older than me, has more hair on his head than I do.  It is not fair that my younger brother eats like three horses and yet, his metabolism keeps him lean, while I look at a cheeseburger and need to go run 3 miles.  It’s not fair that my children are required to eat all of their vegetables before getting a cookie, while I sneak cookies all the time.  Maybe that is part of my metabolism problem.  It’s not fair that someone working in their line of work for 20 years more than me, gets paid more than I do… It’s not fair that of the two turtles crossing the road…one gets crushed and the other one makes it…but it’s ok…life isn’t fair…maybe God will make more turtles.
Life isn’t fair…but it’s ok…because thank God, grace isn’t fair either.
When I was a senior in high school I remember watching this “low speed” chase on television.  It was a white Ford Bronco being chased by police for about 50 miles, for an hour and a half, at an average speed of around 33 mph.  When all was said and done…justice was not served. Nicole Simpson and Ron Goldman were killed…no one was convicted of the crime…so whether O.J. was guilty or not guilty…justice was not served.  “The glove didn’t fit…they had to acquit”…but somewhere in there…it wasn’t fair.
As much of a circus as that televised Simpson trial may have been, it was probably for more “fair” and “just” than the trials of Jesus Christ.
In John 18 and Matthew 26, we find the account of Jesus’ arrest and trials before the Jewish leaders and the Sanhedrin.  The number of laws that were broken and or disregarded in these trials, just to wrongly convict Jesus and get away with it, are jaw dropping.  These laws included; arrest without cause, no witnesses present, trial taking place at night, among others.
Here is what I think happened.  The Jews believed in their laws and their “truth” strongly…however, when confronted with a truth…THE TRUTH…that didn’t match “their truth”…they were left with one of two choices.  They could hold to what is truly…TRUE…or they could justify their own truth, by converting the “truth” to match what they wanted it to be…thus bending the truth.
I think we do the same.  I want what I think and believe to be true, yet, how often will I justify what I do…to match a truth that I WANT to believe…even if it in reality, does not match.
The truth is that life is often not fair.  Will I continue to act justly…according to the line of truth that Christ has set forth or will I bend the truth to justify my behaviors, still claiming justice and truth?
Do you drive 55?...yeah, me either…
Posted by Pastor Ryan Olson at 3:00 PM