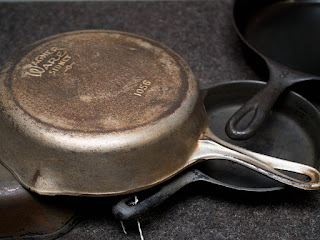 A few weeks ago, I seasoned some new cast iron frying pans.  Sarah had received them for her birthday about 6 months ago and they have been moved from place to place around the house, so as to keep them “out of the way.”  You know how it is, when the family room is full of toys?  You can’t walk through the room without stepping on a Lego with a bare foot and screaming a soprano, “Owie, owie, owie…I have been impaled by a miniature building block!” Thus, in order to get things “out of the way,” you cram all of the toys into the hall closet.  There…now it is out of the way…until you need to open the closet…then suddenly…there is a vast array of items that become “in the way.”

These pans became “in the way,” next to my bed for a couple of month, until I had stubbed all 10 toes evenly…then it was time to get them OUT of the way.  Before I could put them away…where they belonged…they needed to be seasoned…so that they could be used.

I turned to Youtube.  I began searching for a video of how to season cast iron pans.  After being distracted, John Crist videos, top NFL plays, and guitar playing techniques…I found Martha Stewart demonstrating how to season a cast iron pan.

I followed Martha’s instructions…heated the oven…greased the pans…inside and out.  I placed the pans into the oven and set the timer.  A short time later the house was filled with a haze and what Sarah was insisting as a “toxic odor.”  Apparently, we should have invested in some respirators before beginning this project.  If I ever make my own Youtube video of how to season cast iron pans…I will include this small detail.

We suffered though the evening…and even the overnight hours…and thankfully STILL woke up…although our voices were hoarse and scratchy.  The suffering odor lingered for a couple of days…and even longer when we would use either the oven…or the pans.

Today I am happy to say that our suffering is over…at least in regards to the frying pans.
The Bible is filled with stories of suffering…especially in the New Testament.  In fact, you can find an expression of suffering…and a call to follow suit in every New Testament book!

In 1 Peter 4, we find this expressed clearly.  Here, Peter says that we are to “Serve” the Lord…by taking on the same mindset of Christ.  Serving the Lord is difficult.  In fact, the original Hebrew word used in the Old Testament for serving is the same word that would be used to refer to “cultivating” the ground as a farmer would.  It is work…and with that work…is hardship…suffering.  We are to serve the Lord…by suffering the way that Christ suffered.  That doesn’t exactly sound like my “Best life now!” It sounds difficult.  However, when we suffer for the cause of Christ…we can be confident in this...we must be doing something right if Satan sees us worthy to persecute.  Thus…I will proclaim the name of Jesus…even in the midst of suffering.  Then, I can say confidently…my best life is yet to come!  With Him forever!