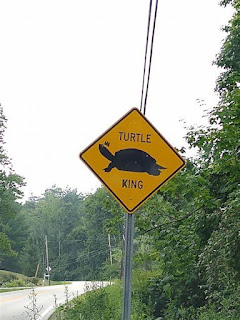 We were rolling along a winding country road in central Morrison County, heading to a nearby crappie lake, when my friend and driver braked hard and swerved to avoid the small mud turtle that was circumnavigating across the pavement.  The boat that trailed us, threatened to pass us by to the left, and the passengers sitting in the back seat, namely my daughter, my friend’s daughter and his wife, gasped and squealed in astonishment.

“It’s ok dear…I think I can avoid the precious reptile.”

“Just hit the thing…God will make more…” I stated cruelly.

The entire cab of the pick-up truck became as silent as a headstone. All eyes looked to me with a loathsome glare.  Fire seemed to light in my friend’s wife’s eyes as the truck came to a stop in the middle of the road.  While the turtle continued its slide southward, my friend looked at me…his face paled with sickening shame, “What did you say?” He implored.

I could not argue.  I am cruel…yet, in some way…I was not wrong.

I have continued to be reminded of my impulsive and insensitive comment over the years. I can’t help but think of that turtle, every time that I see one of its kin flattened on a road as I pedal across the country side on my bicycle…or every time I see my friend…and he requests, “If you ever use this turtle story in a sermon…you let me know…I want to be there.” Well…I guess that the day has come.

Though my harshness cannot be excused, there is a reality that comes into fruition.  God WILL make more.  He will make NEW turtles. (At least, most scholars agree that there will indeed be animals in heaven…though perhaps not that specific squashed turtle.) In fact, God will make everything NEW! He will make a NEW heaven and a NEW earth, and He will allow it to be filled with those who have chosen to follow Christ…and have become NEW creations.  Revelation 22 gives us a beautiful culmination of this very reality.  Just imagine…A New Heaven…a New Earth…the fulfillment of a New and Living Way! Every NEW morning brings the eternity with the person of Jesus Christ…our Savior, our Sanctifier, our Healer…and our Coming King!