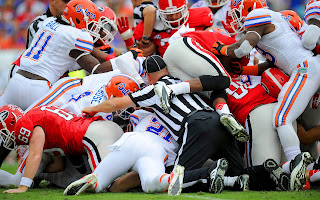 There are two words that strike fear into the hearts of meekly built 3nd graders more than any others…“dog pile.”  Growing up, I remember watching football with my dad and older brother on Sunday afternoons, and at the end of each and every play there seemed to always be a pile of huge men, stacked upon one another, with a brown, leather ball somewhere beneath.

“Wow! Look at that dog pile!” my brother would exclaim.

“Oh man! I wouldn’t want to be on the bottom of that mountain of purple jerseys!” my dad would insert.

I just stared in perpetual fear…overcome by the claustrophobic thought of ever encountering the abysmal moment of being trapped on the bottom of a pile of humans…who refused to get off.

This fear became a reality.

Elementary school recess was a cesspool of aggressive, pre-adolescent boys ranging from kindergarten through the 6th grade.  The kindergarteners, 1st graders and 2nd graders were pretty safe.  At their young age, it would take a pretty cowardly 6th grader, to attack these innocent boys during their first three years of school.  The 5th and 6th graders knew better than to attack each other…it was too risky.  These two upper grades offered too many unknowns, such as which 5th graders are too strong or violent, or which 6th grader is too weak…you just never knew.  The 4th graders were old enough to know to keep their distance and avoid everyone else on the playground, while the 3rd graders were the ones who still wanted to play during recess…and too ignorant to know that they were being hunted by the older grades.

The brown ball was flying at my face…I threw my hands up to protect my face…bobbled the ball about 6 and a half times before finally finding it coming to rest between my hands...and knees…and belly as I hugged the ball like a 4-year-old boy carrying a giant watermelon.

“Wow!” I thought, “I caught it…these boys must really be impress…”

Wham! I was lit up by a dozen or more, older boys yelling, “Dog Pile!” as they swarmed me!

As I lay on the ground with the brown, oval melon crammed into my gut, my mind flashed back to the purple jerseys…wishing that I had a helmet and pads as they did.  No such luck.  Panic began rising from my toes…up my legs…through my torso…to my head and exited out of my eyes in splashes of warm salty water.

The weight was enormous…I thought that I was going to die! After what seemed like an eternity, the pile of laughing boys began rolling off and coming to their feet…the last one ripping the ball from my feeble body as I lay…breathing…finally breathing.

I heard them say, “Who else can we get?” as they scrambled away.

I think that two of the most powerful words in the English language are…love and forgiveness, and I am not sure if you can have one without the other.

Despite the amazing power and beauty in these words, I am afraid that they are far too seldom employed.

Forgiveness on the contrary…is like the removal of that weight.  Forgiveness allows the other person…to be free.

Jesus has given us both…His perfect and incredible love and forgiveness.  Perhaps it is time, that as a follower of Christ…we do the same?