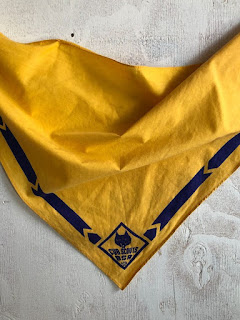 As a child, I always wanted to be a Scout. Not just a small “s” scout, but a full-fledged capital “S” Scout.  During my elementary school years, I remember living in envy of all of my friends who were “Cub Scouts.”  I wished that I too had a navy blue shirt with the yellow handkerchief and the badges affixed on the chest and sleeves.  I could just envision all of my Cub Scout buddies gathering around campfires, roasting marshmallows and sleeping among the howls of wolves, hoots of owls and tents filled with mosquitoes.

One day after school, I went to my friend Luke’s house.  Luke was everything that I was not, yet wished that I could be.  Luke was popular, athletic, dapper, smooth, and suave.  Luke had all of the girls swooning after him…and he was a Cub Scout.  I remember standing in his room admiring his pinewood derby cars.  There were two of them and each one stood next to a trophy.

“Wow! Where did you get these cars and trophies?”

“Oh, they are from Cub Scouts.  We make the cars and then we race them. I won a couple of times.”

“Cool! What else do you do at Cub Scouts?”

“Oh I don’t know…stuff…we meet…learn to tie some knots and listen to some old guys talk.  Then, our den mothers usually bring milk and cookies for us to eat.”

“That sounds really great! I wish I could be in Cub Scouts.”

When I returned home I implored my mother to allow me to join the scouting ranks, “Mom! Did you know that Luke is a Cub Scout? They have camp fires, and they race cars, and they tie knots, and they eat cookies! Do you think I could be in Cub Scouts?”

“Hmmm…that doesn’t sound very safe.  I don’t think that would be a good idea.  You shouldn’t be playing with fire and you don’t even have a license to drive.  Not to mention, I think that you just want to learn knots so that you can tie up your sister, and if you want a cookie, I think there is one left in the cookie jar…help yourself.”

I went to the jar and pondered which to take…the dried up chocolate chip cookie or the stale slice of bread.  I put the lid back on, opting for neither and resigned myself to living a scout-less life, yet my admiration of my scouting friends continued.

One spring afternoon, a group of my Cub Scout friends and I were gathered to play politically incorrect games like, cops and robbers, cowboys and Indians and duck, duck gray duck.  As we were gallivanting among the lilacs and dandelion infested lawns of the neighborhood, we observed an elderly woman crossing the street, struggling with two paper grocery bags.  Apparently, doing “good deeds” is a strong initiative of Scouts, which I was unaware of at the time.  I watched as Tom, Jon, Luke and Jay all bolted after the silver-haired civilian with their bows, arrows and guns still in hand.  The women’s feet quickened, and worry spread over her face as the pre-adolescent posse pursued this now frightened geriatric.  Just as she approached the opposite corner, the quartet ripped the bags from her hand spilling much of the contents.  The four of them scampered to gather the spilled items and place them back into the partially torn brown paper bags.  The foursome handed the bags back to the lady and jogged back to our side of the street where I stood waiting.

“There!” Tom exclaimed, “We did our good deed for the day!”

“Yeah! We will have to be sure to tell den mother, Betty, so we can get credit for our next badge!” Jay agreed.

Good deeds are, indeed, good.  In fact they are fantastic.  However, what I have learned and have been challenged by is the “reason” for the deeds that I do.  It is human nature, I think, to believe that somehow, the deeds that I do will be credited to my future, eternal self.  We default to a belief that if I do good things, then I will earn God’s favor or special blessings from Him.  We tend to believe that the good deeds that we do will pay for the bad deeds that litter our past. Perhaps, we even believe that the good things that we do can erase our sins, pay penance, or restore our broken relationship with God. I have heard some people, even Christians, express the powers of karma arising to pay us back for our bad deeds.

May we come to trust in Jesus and His only Gospel.