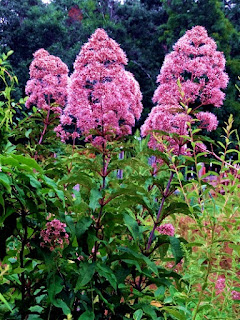 The woman was indeed zealous.  Whether strung out from caffeine, too much sugar, or just caving to her bouncy bottom DNA, she often resembled a tornado in a trailer park. I know this because…she was my mother.  It seemed that every few months or so a new hobby would suddenly appear in her repertoire.  During the late 70’s and early 80’s, it was macramé…followed by an array of hobbies including, plastic grid canvas, cross stitch, sewing, ceramics, crochet, furniture restoration, knitting, more cross stitch, quilting, more sewing, and then…gardening.  Like any of her previous hobbies, she was not deterred by lack of experience.  Every new opportunity was approached with the same exuberance and energy and when the energy just wasn’t there…there was always coffee to reset the circuits, and she was off again.

In her new realm of gardening, she was all in.  These early years of horticulture found her planting a huge variety of annuals and perennials alike, varying their colors and sizes, to arrange for a plethora of petal perfection.  Each morning she would tear out of the house to work in her garden.  She held a broom in one hand and a cup of coffee in the other.  With one she would bump up the good vibes and with the other she would scare away the deer, which were eating at her hostas.

With both the deer and the coffee out of the way she would tear into the weeds that where infiltrating the geraniums.  She ground her teeth in disgust at the weed’s constant opposition to the beauty of her vast array of blossoms.

One day, as she was cultivating the soft soil, she was pleasantly surprised by a new bloom that had sprouted among her begonias. It was a pretty little thing.  She carefully weeded around the newly grown plant. She watered it and even fertilized it, being careful to not give it too much of either.  The new spray of color responded agreeably and began to flourish.  Soon, with the new gardener’s watchful eye and care, the new shoot had grown too tall to remain among the begonias.  She delicately dug around the roots of her precious flower and scrupulously moved it to the rear of the soft bed of soil.  Once replanted, the plant continued to thrive.

The garden had indeed become magnificent.  One day she invited a friend over to see her creation and behold its beauty.  Her friend was a Master Gardener by title and knew a great deal about flowers, herbs, and shrubs.  The Master Gardener was enamored with what my mother had accomplished. The two of them walked along the path of the garden. Her friend made many encouraging and affirming compliments to her layout and uses of coordinating colors, sizes and types along the beds. They came upon the coffee-consuming creator’s favorite plant in the entire garden.  By now, what had started growing among the begonias was now a tall hearty plant with robust purple blue and pink blossoms, spreading wide as it stood alone among the irises and lilies.

“What is that?” her friend bequeathed.

“Oh, that is a little wild flower that I found growing over near the begonias…but it just got too big…I had to move it over to the lilies.”

“That is a weed.  It is known as Joe Pye…Queen of the Meadow…it is not a wild flower…it is a weed.”

My mother did the only thing that she could do…she downed the rest of her coffee and stormed through the garden, stepping right through the chrysanthemums, and daffodils.  She reached down, and grasped hold of the stalk of the newly discovered weed and gave it a jerk.  She jerked harder.  She ripped at it.  My mother, spastically, tried to shred the weed, but by now the root had grown too deep.  The weed remained steadfast.

My mother then stormed into her garden shed…pulled out the spade and dug until that week was gone…forever.  Then…my mother enrolled in classes to become a Master Gardener.

Jesus uses countless illustrations and parables dealing with seeds and fruit and weeds.  These are lessons that we would do well to take to heart.  We find a series of these metaphors in Matthew 13. Here Jesus talks about seeds falling on different types of soil, mustard seeds and weeds that are sown by an enemy intended to choke out and even deceive the seed of the Gospel that has taken root in the hearts of believers. These parables reflect well what is taking place in the book of Galatians.  In this letter of Paul we read how metaphorical weeds have popped up among the believers, and it is time to deal with these weeds!

Identifying the weeds is a good first step.