Kick to the Teeth 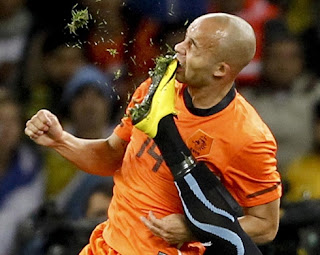 I woke up this morning with pain in my lower back.  I stepped out of bed and was reminded of the heel pain I have been dealing with for the last few days.  Once I was able to get vertical and head out of the bedroom, the realization of my stiff neck and headache hit me.  I must have slept wrong on my flat, lumpy, supposed to be soft, feather pillow.  As much as I refer to it as “my pillow” I don’ think it has the same attributes of a My Pillow.
I was reminded of a few years back; when I was struggling through a bout of plantar fasciitis…which is a fancy name for…foot pain.  I recall hobbling around the house…limp…limp…limp, while grumbling, “oooh…ouch…eeeeh.”  This pattern continued much of the morning….limp, “ouch”…hobble… “eeeeh”….stumble…“ugh”, until I reached my chair and sat down…“ahhh.”  After listening to my groans and watching my movements, my then 4 year old daughter finally spoke up and said…   “Dad…you should just die!”
Wow!...I gotta admit…that seemed a little harsh.  Wouldn’t “Dad…you should go to a doctor,”…or even “Dad I am sorry you are in so much pain.”…but die!? Really!?
So I asked her, “Die? Why would you say I should die?”
She replied without hesitation, but with just the slightest, “Dad you are so dull” tone…“Because if you die…then you get a new body!”
Ok…I didn’t see that one coming, but…she was right.  Granted, she had no idea what that would really mean for her…but she was right…if I died, I would receive a new, perfect body…because Jesus conquered death and sin.
In John 11:17-44, Jesus stood face to face with death and gave death a mighty blow, right to the teeth.  His friend, Lazarus, is dead…in fact, had been dead for four days…he was a rotting corpse.  Jesus looked at death…and recognized it for what it was; a picture of the corruption that God never intended.  Jesus then called Lazarus forth, kicking death in the teeth and setting up the final blow, which will be his own resurrection.  Because of how Jesus conquered death and sin…my daughter was right…even though I die, one day…yet will I live…and I will live with a new, resurrected body.  That is a promise not just to me.  It is a promise to anyone who believes in Him.
Posted by Pastor Ryan Olson at 2:24 PM