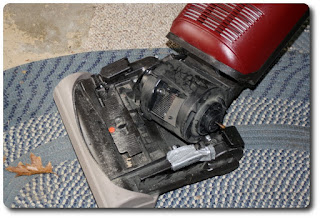 There was a time in my life, when I was the father of only two children.  You would think that fathering two children would have been easier than fathering my, now, four children.  However, that is not the case, when one of the first two children is a terrifying, three year old with the destructive mindset of a gremlin.  It was not uncommon to hear the words “Mom! Isaac is chasing me with a dangerous knife!”
If my memory serves me correctly, in a short window of time, Isaac’s destructive behaviors were expressed by stepping on ink pads and then making footprints across the brand new basement carpet, chiseling a hole in the linoleum with a screwdriver, pocking holes in the kitchen floor with a “dangerous knife”, coloring the white changing table with crayons, chasing her sister with that “dangerous knife,” and finally throwing the vacuum cleaner down the stairs.
There is a saying, “You can either have nice things…or you can have children.”  It appears that we have chosen children.  Even if you didn’t know we had children, someone could walk into our house and immediately conclude, “Oh…you must have children.”
“Yes we do! How could you tell?”
“Oh…just the broken window, that hole in the drywall, the tear in the recliner, the broken picture frame hidden in your closet, the broken brush in the garbage, the loose toilet seat in your bathroom, the dent in your front door…”
“I see.”
Isaac’s streak of terror didn’t go without reprimand, yet often, the consequences seemed to go without effect…until now.  Isaac has transformed into a nice young man who, now, occasionally apologizes for breaking things!  Oh, how far we’ve come.
After Isaac threw the vacuum down the stairs…and had received his consequence…he returned to the scene of the crime...and began laughing.  With his older sister standing next to him, he gazed down the stairs, to where the broken vacuum lay, and laughter came from his belly. He said, “That was funny Hannah!”
Despite the consequences of his actions…somewhere deep inside he felt, “That was worth it!”…which pretty much meant, “I did not enact the most effective of consequences at that time.”
What Isaac did was wrong…but there is a story of a woman in the Bible (John 12:1-11) who did what was right…even when all others around her thought it was wrong.
In the story, Jesus is only a few days from his arrest and execution. There we find him eating a meal with friends and followers.  While he was there, a woman named Mary takes a bottle of perfume, valued at thousands of dollars…and she dumps it out on Jesus.  All of disciples and others, who are gathered, get in an uproar, “What are you doing? Don’t you know the value of what you just had?”
The answer, of course, is, “Yes…she knows.”…but she also knows that Jesus IS WORTH IT!
Throwing a vacuum down the stairs? Not worth it.
Giving Jesus anything and everything…totally worth it.
Posted by Pastor Ryan Olson at 8:03 AM