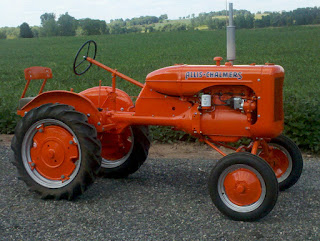 My dad is not exactly a “great” gardener.  In fact, recent years has revealed gardening skills which reflects the strategy, “If I pave the entire lawn…I won’t ever have to mow the grass!”  True...and maybe, if he were to paint the concrete green, it would at least look like a lawn.
I remember as a child, my dad purchased an old Allis Chalmers B series tractor and a number of old farm equipment accessories.  Initially it was suspected that he was engaging in an endeavor to construct an antique farm equipment museum…but no…it actually appeared that he intended to use them.  I can’t deny that it certainly was interesting to see how an old pull behind potato planter, potato digger, corn planter, cultivator, plow, disc, and rake all worked.  It didn’t take long for a tractor…even an old small one…to plow up half of our 3 total acres.
What can you do with a 1 ½ acre garden? You can plant 1 acre of sweet corn, nearly ½ acre of potatoes…and then fill the rest with beets and onions.  This particular year he planted 100 onions.  I hated onions.  My dad loved to plant the garden…but when it came to caring for the garden…he was pretty much hands off.  My 3 siblings and I were then hired at a rate of roughly 10 cents per hour to weed 1 ½ acres of corn, potatoes and onions.  Our pay was not usually seen in cold hard cash as much as in the form of imaginary promissory notes.
It’s hard to be motivated to take care of such a large garden with so little incentive…not to mention…hating onions.  Regretfully, one fateful weeding day, I attacked the weeds around the onions with a hoe…eliminating the weeds and an estimated 82% of the onions.  This resulted in a stern lecture and a threat to reduce my pay.  The lecture was a far greater motivation.
Gardening is much more than just planting.  My dad was a great planter…or perhaps more accurately…a great “player,” as he loved to “play” farmer on his farm equipment.  However, aside from planting and reaping, he was not terribly involved.
In John 15:1-17, Jesus gives his disciples a metaphor. He says that He (Jesus) is the True Vine…and that the Father is the Gardener.  The Father is active in pruning and taking care of the “branches”…which is those who have chosen to follow Christ.  I don’t think anyone likes being “pruned.” It’s painful…uncomfortable…not fun.  Yet, through the work of the Gardener, we produce more of the good stuff!
If we had done better work…perhaps we would have seen a greater harvest of potatoes, corn, beets, and onions.  The next time you are pruned…recognize the benefits…that you have an active Gardener creating in you a greater harvest of fruit…such as love.
Posted by Pastor Ryan Olson at 2:51 PM