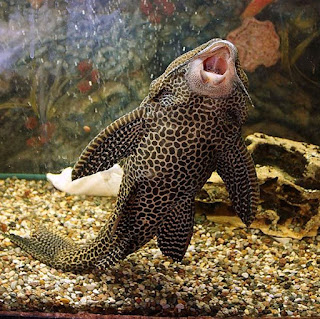 Quite a number of years ago, my wife and I purchased a Japanese fighting fish, better known as a Beta fish, from one of the students in our youth ministry at the church.  We were guaranteed that it was a male fish…the male fish are the ones that grow these long flowing fins, and you have to keep them alone in their own fish bowl or they will kill whatever other fish that enters their water.  She was wrong…we got a female fish…they don’t grow the long flowing fins…nor do they look fancy or pretty.  The female Betas pretty much look like an angry Crappie minnow.
So we asked her… “Since it is a female fish…and not a male fish, can we put other fish in with her?”
“Yes…that should be fine…it’s only the male Beta fish that you have to keep separated.”
This was good news! Now we had the green light to buy a Plecostomus…(an ugly algae eating fish), so that we wouldn’t have to clean the 10 gallon fish tank which contained the equivalent of a single one inch fish.
Two days later…I couldn’t find the Plecostomus, affectionately named Hoover.  I scoured the tank until I finally spotted something “fishy”…well…formerly “fishy.”  I observed that there was a cleanly picked Plecostomus skeleton settled gently against the pea gravel waving its tail in the current of the circulation pump…that’s creepy.
“Hey! I thought you said you could put other fish in with a female Beta!?”
“You can.”
“Well…how do you explain this?” showing her the skeletal remains.
“Maybe she just needs time to get used to a new fish.”
“It’s dead…how much more time does it need?”
“Try another one.”
So we did.  Since Hoover met an untimely demise…and thus the name was retired…we opted for “Hickie.”
It seemed to be working…Hickie lasted over a week and we thought we were good to go. Until…we turned our back for one night…and in the morning we had our second Plecostomus doing a back float.
“That female Beta killed another fish!”
“What kind of fish?”
“A Plecostomus”
“Try a Goldfish.”
“I don’t WANT TO TRY A GOLD FISH…I WANT A PLECOSTOMUS!”
We tried the goldfish.  He was picked finless before he finally cashed it in.
When we lose something…like a pet…or something of value to us…or even a close friend or a family member, it’s irreplaceable.
In John chapter 14:13-31…Jesus says something remarkable.  Leading up to this passage he has just told his disciples that he is leaving…but then he says…don’t be troubled by that…because I am going to send “another” counselor.  If I were the disciples I would be like…“I don’t want “another”…I want YOU JESUS!.” However, what is interesting to note is…that this word “another” in the original Greek language it was written in means… “Another JUST LIKE Jesus.”
Jesus comforts his disciples and us…by sending “another” that is JUST LIKE HIM. He sends us the Holy Spirit.  I think it is time for us to take a closer look at this Spirit…who is just like Jesus.
Posted by Pastor Ryan Olson at 5:23 PM