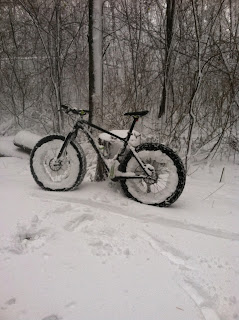 I woke up this morning to a fresh 8-12nches of snow. Having grown up in Minnesota, I have come to expect late winter snowfalls.  For the most part, I enjoy Minnesota winters.  I like snow…Nordic skiing…ice fishing…watching the kids go sledding…(I used to go sledding with the children…but now at age 42…I don’t mind the going “down”…but the coming back “up”…is not nearly as thrilling as it used to be.  Not to mention that when my oldest daughter was 6 years old, she and I went down the hill together and she flew off and broke her collar bone…that was a bummer)…and fat biking.
In attempt to fight back at the un-preferred weather, I will often head out to indulge in the white hills of splendor upon my fat bike.  This morning was no different. When I arrived at the trail and observed how they were still untouched by bikes, skis and feet…I was excited to be the first one to traverse the smooth, snow covered landscape. I guess you could say that I am, at heart, a “snow wrecker.”  I particularly enjoy looking back across the snow and seeing the single track laid behind the back tire of my bike.
I attacked the new snow with vigor that lasted approximately 30 seconds but felt like 10 minutes……and then, with the snow reaching nearly to my hubs, and my quadriceps quivering from exertion, I had a decision to make.  Do I turn around and push my bike back out of the trail and head for home or…do I keep going into the wild white yonder of the snow covered hill before me.  I chose the latter.
Standing at the bottom of the hill, I set one goal for myself…to get to the top.  My first attempt to climb the hill went about 10 yards, before I spun out and had to try again.  I wheeled the bike back to the bottom, packing the snow beneath me as I went.  My second attempt went only slightly better…perhaps adding 10 more yards.  The third attempt…a little farther.  The fourth attempt…I struggled to get anywhere and so I didn’t go as far.  The fifth attempt…a little farther.  I continued this pattern, over and over again, mostly gaining ground…sometimes going next to nowhere.  After about 15 minutes, I had traveled about 60 yards of the estimated 500 yard length of the hill, and I was pretty sure that my lungs had begun to turn inside out and were ballooning out of my nose.
At the 25 minute mark, I had reached the halfway point and I became convinced that my lungs were now bleeding.  Finally, after nearly 45 minutes of death on a bicycle, I reached the summit of the hill.  I laid down…made a quick snow demon…(which is like a snow angel…only you just lay there and don’t move anything).
Then I picked up my dizzy self…got on my bike…and worked my way back down the hill. When I was done…there was no, “neat little tire track in the snow.”  The path that I had gone on was a wide berth of footprint…bike tracks…spit…lung mucus…and body prints.  To say I was a snow wrecker…would be like saying, “My dog’s breath stinks.” It simply goes without saying.
The Bible uses the words snow and sin in the same sentence several times. Isaiah 1:18 says, “Though your sins are as scarlet, they shall be as white as snow.”  This power of sin cleansing…came through the work of Jesus Christ on that very first Easter.  I might be a snow wrecker…but Jesus is a “sin wrecker.” He came to crush sin…our sin…my sin, thus making us…me…like the thick white carpet that I woke up to this morning.  I am thankful for the 8-12” reminder this morning of the sin wrecking that Jesus did.
Posted by Pastor Ryan Olson at 3:47 PM