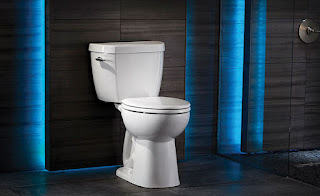 The Mission…should I choose to accept it…Replace both the toilet and vanity in the bathroom of a home that holds a family of six…in 36 hours or less…before company arrives.

Despite being a dire undertaking when potentially 6 people in a home all need to use the facilities all at the same time…I accepted the mission. Yes I know that it was just a generation prior, (my mother’s in particular), who had 9 children and two parents sharing one bathroom…with one sink…and one bathtub…and no shower.

In a bit of irony, I think that it was likely that her mother did not have running water when she was a child.

In any case, this was the mission that I had accepted.  To prepare for the task ahead, I had gathered all of my supplies ahead of time, so that I would not need to go to the hardware store, and I could just attack the project first thing on Friday morning.  In fact, to be overly prepared for the mission, I had even ripped out the old vanity the night before…but not the toilet…that would be too risky.

By the end of day one, my back hurt so bad that I had to have Sarah drag me to my bed.  I think that I fell asleep before the lights went out.

Finally, I returned home to finalize the installation…only to realize I was short one plastic elbow.  I sent Isaac to the store to get the final piece of the puzzle.  When he returned…I realized that I didn’t need the elbow.

When all of the pieces were in place and secured tightly, I turned on the water and declared “Mission Accomplished.”

When a mission stands before us we must decide, “Will I accept the mission?”

When it comes to the Mission of Christ we are beckoned to join him.  The mission will be challenging. There will be times when we will feel ill equipped.  There may even be a day where it seems that we need someone to drag us to the next location.  But…the Mission of Christ…is WORTH IT!