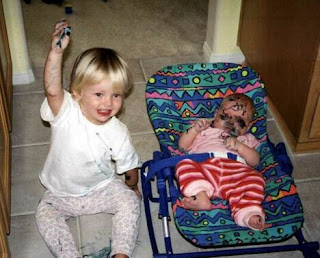 I remember as a child my parents told me that they had put a curse on me. “That’s doesn’t seem very nice," I thought. So I said, “That doesn't seem very nice.” Then I asked, “Why would you do that?”

“Because, we want you to know what it is like to have a child just like you.”

“That seems more like a blessing than I curse,” I replied.

At this point I continued to live my life just as I always had.  Each day I would wake just to torment my three siblings.  I would trick my older brother into doing my chores. I would push my little brother into a closet and hold the door closed until I grew tired of his screaming and kicking. I would continuously dunk my sister’s head underwater while she was trying to enjoy the swimming pool.  I came to believe that the family would not only be bored without me…they may not even be able to function. At this point in our childhood experience my three siblings only knew to say two phrases. “Ryan, stop! Ryan, stop!” or “Moaaoom! Make Ryan stop!”  How monotonous. What would they do without me?

I couldn’t wait to have children of my own.  I would often spend time envisioning how I would enslave them as I had been enslaved as a child.  Yet, I could also imagine the blessing that children that were just like me would bring not only into my family, but into the world.  My children could teach the world to laugh again, smile again and live again.”

The other night I was leading my family, including my four children, in the after supper clean up.  As we worked to do the dishes, clean the floors, wipe the surfaces, empty trash cans and take out the recycling, I began to hear faint frustrated cries.  It sounded almost like a ghostly chant coming from the basement.  “Issssaaaaccc! Stop!”

“I hope you have a child just like you!” I insisted.

“Why thank you for such a blessing father!”

“It wasn’t a blessing…it was a curse.”

In Galatians 3:10-18, Paul begins to talk about a promise and a curse.  In fact, he begins to talk about the Law…the rules that GOD had given the Jews to live by...and he says that anyone who “lives by the Law us under a curse.” This seems crazy! How can this be? It just doesn’t seem to make sense! Doesn’t God want us to obey the Law?

I think what Paul is showing us is that the Law, CANNOT SAVE US! BUT! The PROMISE that God has given to us, is that when we believe in the Savior…in Jesus…like Abraham believed, we receive the amazing promise of salvation.  The Law cannot give us that promise…yet, God offers the promise to all who believe.

May we live by faith…and not by the curse!